If you followed my Go with Oh tour last November, you know of my incredible exploits across Europe. It was certainly lightening in a bottle and probably impossible to recreate.

I’ve written about what I’ll miss about Prague, what frustrates me about France, and how I cruised the Amalfi Coast with a modern-day philosopher. I’ve still got tons of tales to tell, but one aspect that I’d like to expound on are the accommodations I enjoyed while in Europe. After all, where you stay can easily make or break an experience.

In case you didn’t know, I won Go with Oh’s autumn blogging competition. The prize was a month’s accommodations in Europe, thus the majority of the places I stayed during those 30 days were provided by Go with Oh. An apartment rental company with properties in twelve great European cities, Go with Oh allowed me to not only pick five of those cities, but also the apartments I would be staying in.

Everyone has their own priorities and preferences when choosing holiday accommodations, but I had only three: Wi-Fi, good location, and a washing machine. That’s it and in that order. I was able to find that and a whole lot more in my five Go with Oh apartments. Here’s my breakdown of each property:

The first stop on my Go with Oh tour was in Prague. Located just a short walk from Old Town, this apartment was by far the biggest one I stayed in during those 30 days. First and foremost, the building has an elevator, which doesn’t seem like a big deal, but if you’ve got a 70-pound suitcase to carry up three flights of stairs, it becomes a God send. The place is also full of original character with its crown molding, chandeliers, bay windows, and parquet floors, all of which totally distracted me from the Laura Ashley-like love seat {see pic below}.

The apartment has a full kitchen, which came complete with Tabasco and Czech beer {I’m thinking that was a lovely gift from Go with Oh, however}. A washing machine and Wi-Fi alone are enough to make me book this pad again, but the ginormous bathroom puts it over the top. I’ll admit that I didn’t fully appreciate the grand scale of this bathroom while I was staying in Prague, but I do now. More on that later. I was told the place has satellite TV, but I never even turned it on. I was way too busy enjoying Prague.

Final Verdict: I’d totally stay here again. It was clean, comfortable, and had an unbeatable location. The only problem I had with the place is that I didn’t get to stay longer. That’s real talk.

Ahhh….Florence! The subject of my Go with Oh winning entry. I’d have to say that the very best thing about this apartment is its location. It literally is behind the Uffizi Gallery, next to the Arno River, and maybe a four-minute walk to the Duomo. It’d be hard to get a better location than this. Sadly, the building doesn’t have an elevator, but it did have an owner willing to lug my bags up and down the stairs. That’s almost as good, right?

As per my requirements, the apartment has Wi-Fi and a washing machine. I was a big fan of the bedrooms. There’s the master and connected is a smaller one that is perfect if traveling with kids. For me it was used as a giant closet. The bathroom is large by European standards, but not as big as the one in Prague. Getting used to the shower size in Europe would prove to be quite a task. Let’s just say that I didn’t shave my legs while staying in Florence. 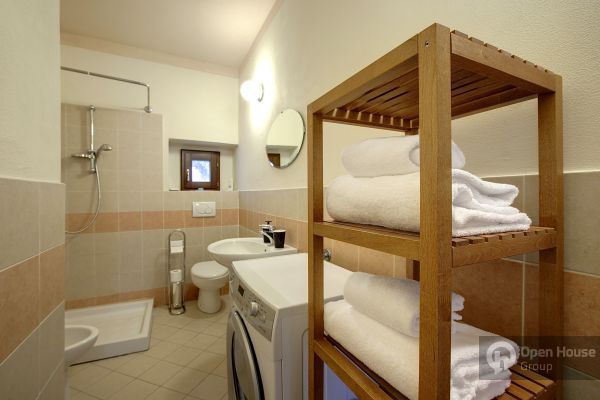 Final Verdict: With it’s stellar location and home-like feel, I would happily stay here again. The super-helpful owner puts my apartment experience in Florence right up towards the top. My opinion was not swayed in the least by the fabulous bottle of wine that was given upon check-in either.

When I was combing through all the Go with Oh Rome apartments, this space-age place stood out. I think you can see why. It’s totally wacky and unexpected in the Eternal City. The fact that it’s housed in a 16th century building makes it even crazier. I had to stay here. After all, it has Wi-Fi, a washing machine, and a great location. The silver bean bags are just an added bonus.

Located between Campo di Flore and Piazza Novona, the apartment is perfectly situated for my taste. There is no elevator, but by week two in Europe, I’d grown accustomed to lugging my overstuffed suitcase around, so that was no big deal. Downstairs has an open floor plan with a full kitchen, dining room table, a mini office, and a half bath, which was awesome to have. Upstairs is a loft-style bedroom and bath. Although the bathroom is a good size with modern Kohler Faucets, the shower is typically European. Small. One of the most interesting parts of this apartment is the clear Plexiglass parts in the second floor. You can literally see through to the bottom floor, which is a cool touch indeed.

Final Verdict: I enjoyed my time in this unique apartment, but I don’t think I’d pick it again. It’s not because I didn’t like my stay or that there is anything wrong with it. Instead, it’s because I see it as a novelty. It’s definitely a ‘been there-done that’ sort of place. I’d certainly make sure to check it out for yourself. It’s something different in a sea of historical apartments in Rome.

Let me just get to the point. I chose this apartment for the view of Sagrada Familia. It could have been a complete dump, had that view, and I’d still picked it. But fortunately, this Go with Oh apartment is totally fabulous. It has an elevator, which is great since its located on the top floor. From the spacious and well-equipped balcony, you can not only see Gaudi’s church, but you can see all the way to the Mediterranean Ocean. There’s tons of light that pours into the combo living room/kitchen. 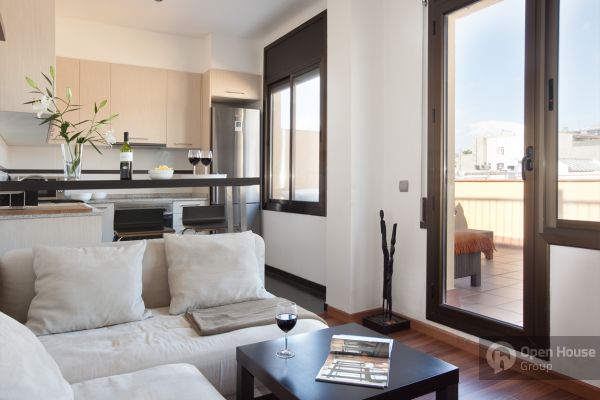 Decorated in a clean, modern way, my Barcelona pad not only has a great location, but it also has a washing machine and Wi-Fi. The bedroom is a bit small, but it didn’t really matter since I only was in it to sleep. Otherwise I was out on the balcony or exploring Barcelona. I’d be remiss if I didn’t mention the bathroom. It is totally modern, but a bit of flexibility and resourcefulness is required for ladies to shave their legs in the shower. Yes, again with the leg shaving.

Final Verdict: I would stay at this apartment again in a heartbeat. Even with the small shower {it’s Europe, right?}, I wouldn’t change a thing about this place. I’d love to go back in the summer, sip on some sangria, and hang out on that balcony for hours.

I’d waited 38 years to get to Paris, so I’m pretty sure I’d slept on one of the couches that I saw on the street corners. That’s no exaggeration. Fortunately for me, I had Go with Oh and their perfect Parisian apartments to choose from. When choosing this studio, I had no real idea of its location in the 10th arrondissement or what that even meant. Lucky me, because I loved this up-and-coming neighborhood. My street was quiet, but it did have a couple of nice restaurants and a grocery store close. Plus, it was about a five minute walk to two different subway stations.

The studio is located on the third floor of a building without an elevator. It was comedy gold watching me drag my bags up the staircase. I simply viewed the exercise as a blessing and an invitation to eat more cheese and drink more wine. In one room is a queen-sized bed, closets, desk, kitchen sink, and bathroom. Being from Texas where everything’s bigger, I certainly got a taste of cramped city living.

The frosted sliding glass door separates the sleeping from the showering quarters. In short: Don’t rent this place unless you are by yourself or very comfortable with the person you’ll be sharing it with. There’s little to be left to the imagination given the setup. Despite the lack of privacy, this bathroom by far has the best shower of all the apartments I stayed in. I’m pretty sure I could have done a cartwheel in there if I’d wanted to. All the fixtures are new, and after nearly a month of moving from place to place, I greatly appreciated the fact that I could shave my legs without striking some sort of unnatural yoga pose. Yeah…yeah…yeah…

Final Verdict: Although small, I loved this studio apartment and would easily stay again. I’d love to say hello to the neighbors who were so welcoming to me. The fact that the place isn’t in the heart of the city might be what made it more endearing to me. Instead of simply being a visitor to the City of Light, I got a taste of what life is like as a Parisian. That, my friend, is a priceless feeling.

There you go, my month’s worth of accommodations from Go with Oh. If you’re heading to Europe in the future consider staying in one of their apartments. With so many to choose from you’re sure to find something that fits your needs and lifestyle. I know I did.