I adore London. The city has some of my favorite things: The Globe Theatre, fish and chips, Wimbledon, red buses and black cabs, Four Seasons Park Lane, and David Beckham. With so much to see and do in London, I could easily spend a lifetime there and never be bored. With that being said, it may come as a surprise that, besides Heathrow, I didn’t step foot in the city during my July jaunt to England. So, where did I go instead? 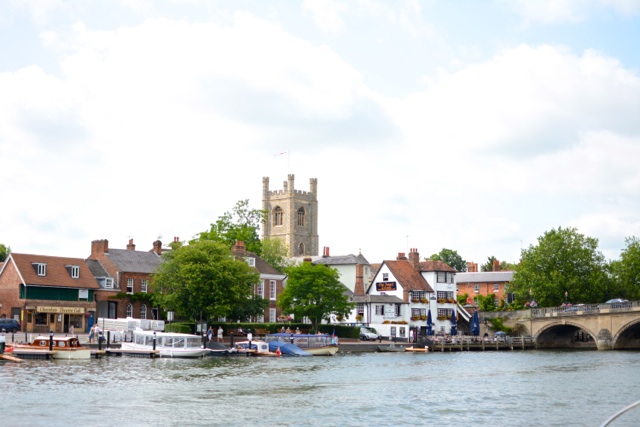 About half an hour west of London lays one of the more picturesque places I’ve seen–Henley-on-Thames. It’s small and is as quintessentially English as it comes. When you think of quaint English towns this is what comes to mind.

This was my third time to Henley, as my friend, Mrs. O, calls this lovely corner of the world home. However, this was the first time I’d seen it in the summer. Surprisingly warm, sunny days, emerald green grass, and gardens in full bloom made Henley a splendid sight. 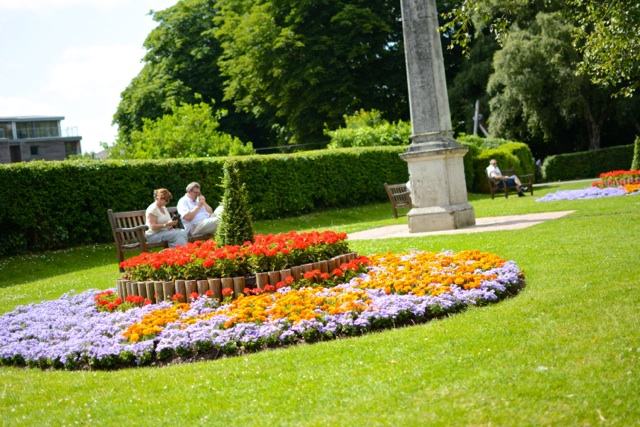 My visit was timed according to the Henley Royal Regatta, one of the UK’s most storied social events of the season. Ladies wearing hats and their most fabulous daytime dresses and gentlemen wearing ties, slacks, and colorful jackets, descend upon Henley for this legendary rowing event.

Held annually on the famed Thames River since 1839, the Regatta attracts thousands of people each year. Even if you’re not a rowing fan, it’s a great excuse to get dolled up and drink Pimm’s, which is why I enjoyed myself so much. 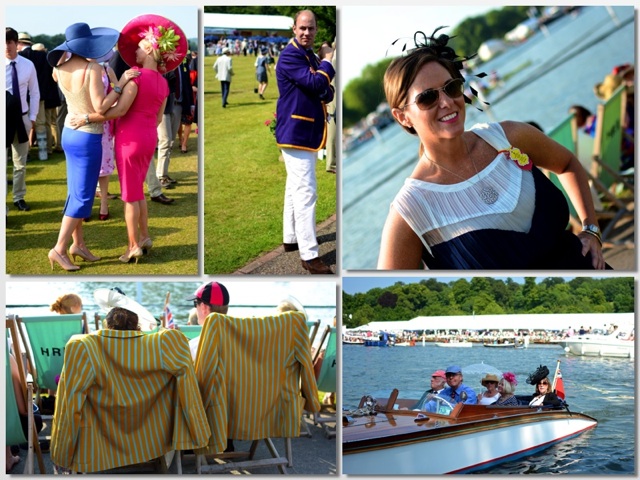 If you’re not lucky enough to be in Henley for the Regatta, there’s plenty more to enjoy. For a little river time without actually having to row, check out Hobbs on Henley for boat charters. I enjoyed an hour-long cruise, complete with Champagne, along the Thames in their luxurious Linssen yacht, the first of its kind available in the UK. Viewing the landscape from the water offers a unique perspective and one that’s hard to beat. 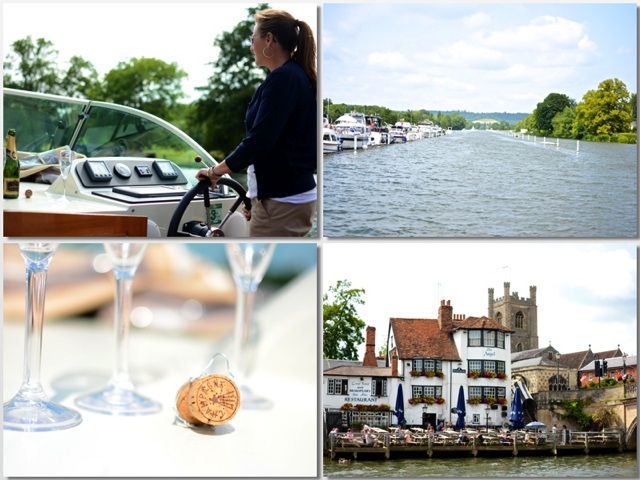 After an afternoon on the water and a pitcher of Pimm’s at the Angel on the Bridge, food becomes the order of the evening, and Henley isn’t short of delicious places to eat. Orwells is one such place. Located near the Shiplake train station, Orwells offers traditional pub favorites like fish and chips, as well as more sophisticated dishes. Lamb rump, beef rump and cheek, pork belly, and several varieties of fish are some of the delicious mains available. Desert is not to be missed, especially the coconut crème brulee. 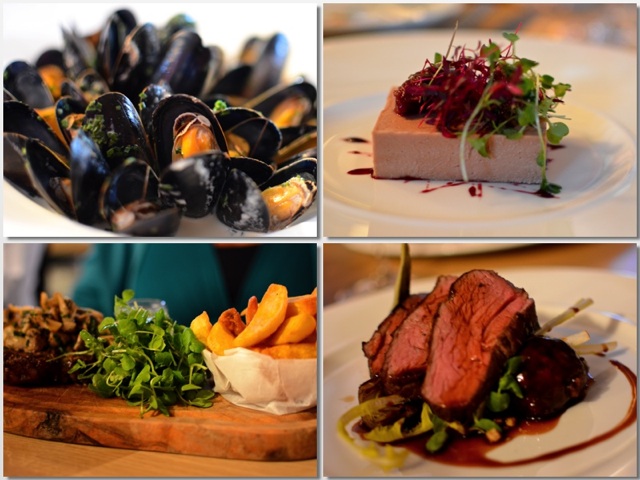 From Heathrow, Henley-on-Thames is about a 30-minute drive. From Paddington Station in London, Henley is a scenic forty-five minute train ride or a short 20 minutes to the nearby Redding station. Either way, this lovely little English town is worth the trip, even if it’s just for the day. 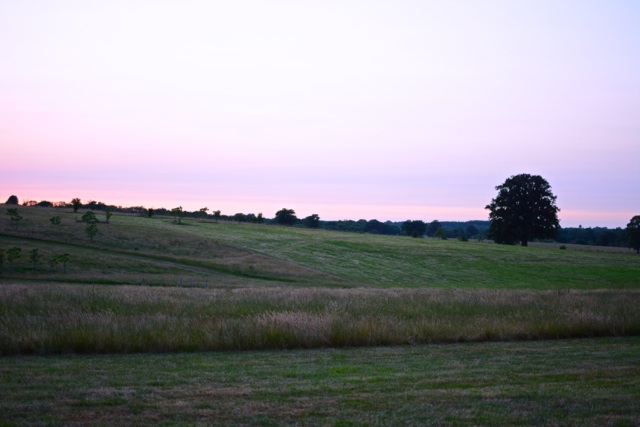 South of Henley and west of London is Hampshire, the heart of Jane Austen country. This is where the famous author found inspiration for Sense and Sensibility, Emma, and Pride and Prejudice. After seeing the rolling green hills, tiny villages, and homes with thatch roofs, it’s easy to understand how Austen was inspired to write such classics.

It doesn’t feel right driving up the long drive to the Four Seasons Hampshire in a car. Instead, a horse-drawn carriage seems more appropriate. A restored Georgian manor, Hampshire sits on 500 acres of lush, green fields and rolling hills in the distance. The landscaping is meticulous and includes various flower gardens scattered throughout the property. Two scenic ponds, cattle, and horses complete the country ambiance. 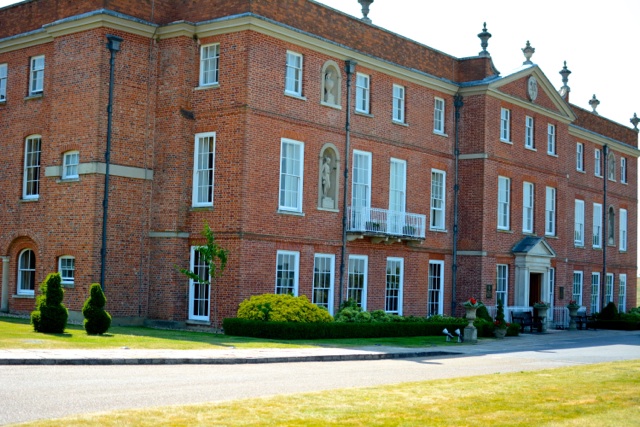 With 133 guest rooms, it might sound silly to describe a grand manor like Hampshire as quaint, but that’s the impression I got. How many hotels are you greeted by the resident dog? Oliver the black lab, stole my heart at first sight. And although I didn’t grow up in a place like Hampshire, somehow it felt like home. That’s exactly how I like a hotel to feel. 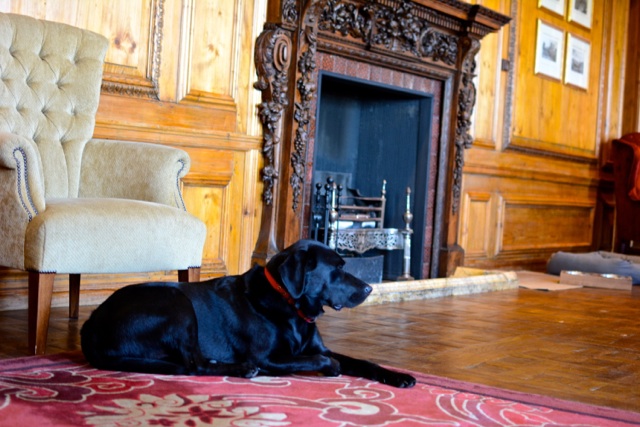 My room, of course, was stunning. Typical of the Georgian era, the ceilings were tall and the walls featured detailed woodwork. Antiques filled the room, as did modern touches like a flat-screen television and iPod docking station. Artwork depicting the region decorated the walls and the crisp white linens invited me to bed. The marble bath featured a large tub and a separate shower. My view was overlooking one of the ponds and the clay pigeon shooting range. Essentially, that room is how I would want my country house to look. 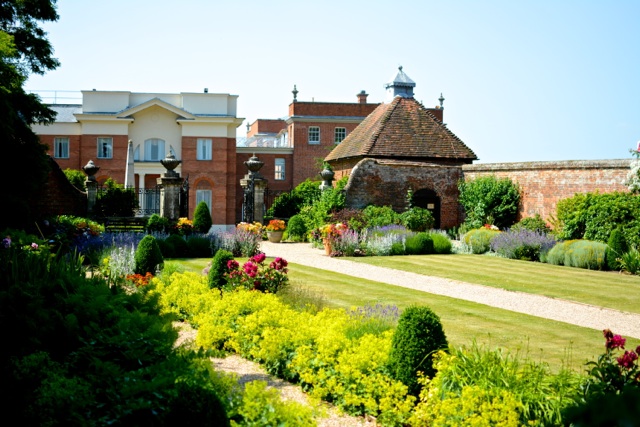 It was a particularly warm and sunny the two days while I was at Hampshire, which was perfect for relaxing by the pool. Normally the indoor section is utilized more than the outdoor, but the weather was just too nice for guests not to take advantage of the comfortable loungers. Once the manor’s stables, the spa is located next to the pool and offers a multitude of services… Just in case being in the quiet countryside isn’t enough. 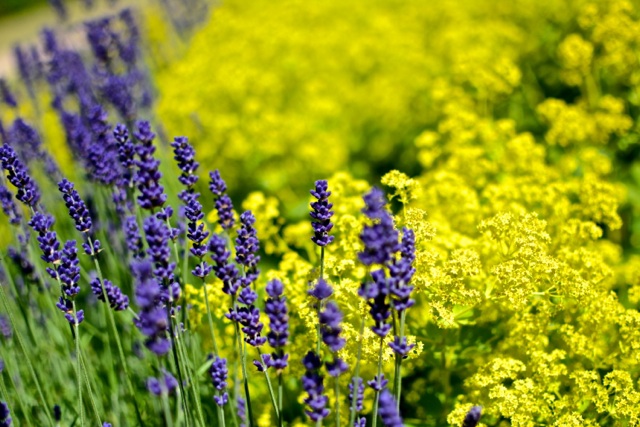 Four Seasons Hampshire offers a plethora of outdoor activities for their guests: Tennis, horseback riding, clay pigeon shooting, croquet, fishing, falconry, and bike riding. Seriously! This place is ripped from the pages of a Jane Austen book. I took advantage of the complementary bicycle and explored the property a bit more. 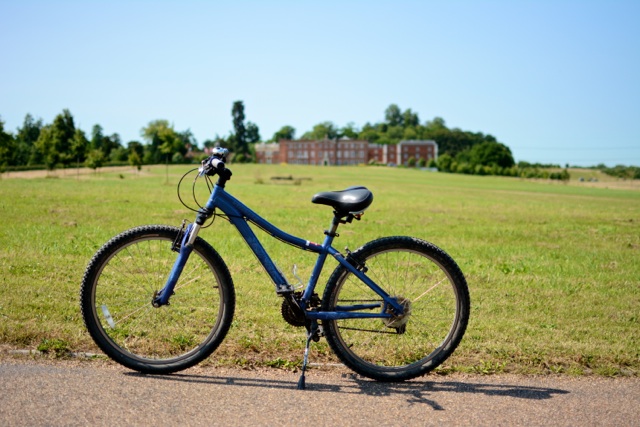 With three restaurants on property {Seasons, The Bistro, and Café Santé} and two lounges {The Library and Bar 1086}, there’s really no need to even leave. Café Santé is located near the spa and has an Asian inspired menu. It’s perfect for lunch, while Seasons offers a French-European menu for dinner. 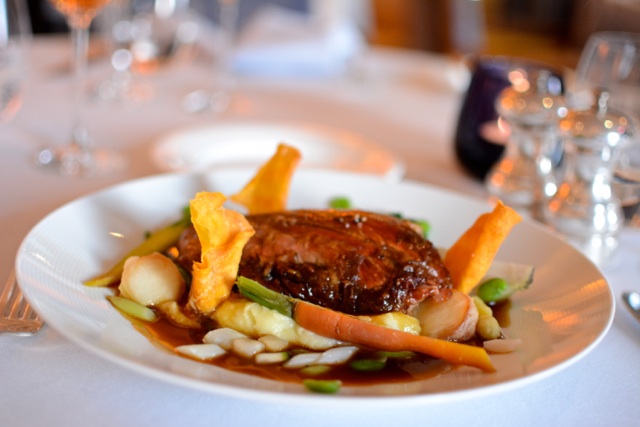 Unwind with a cocktail in the cool and comfortable setting of Bar 1086. James, the talented bartender, treated me to a cocktail lesson. Mozart {Champagne, rum, pineapple and lime juices, simple syrup, and grenadine}, Watermelon Martini {watermelon and lime juices, simple syrup, and vodka}, Root Cosmo {tequila, lime and cranberry juices, and cuantro}, and the 22-Mile Cocktail {lemon juice, elderflower cordial, chili-infused gin, honeycomb, and plain gin} were all made with the freshest ingredients and the finest liquors. I’m not sure if I could replicate James’ genius behind the bar, but I would certainly be willing to take additional lessons until I’ve mastered the hand-crafted drinks. My favorite? The 22-Mile Cocktail—spicy mixed with a bit of sweet hit the spot. 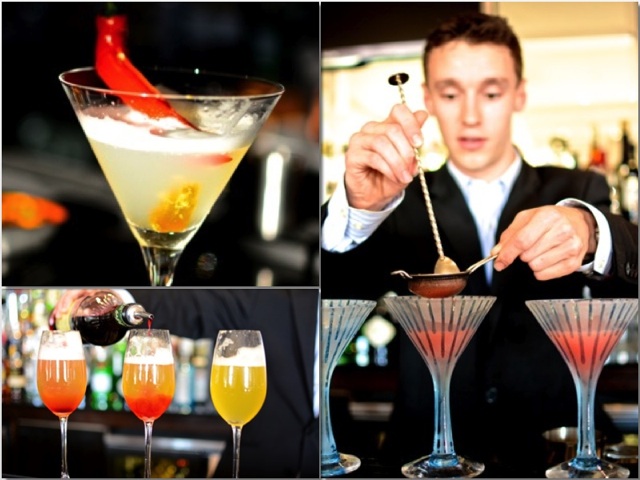 A trip to Hampshire wouldn’t be complete without a stop at Jane Austen’s House Museum. Located about 30 minutes from the Four Seasons Hampshire in Chawton, this is the home that Austen lived in during the last eight years of her life. 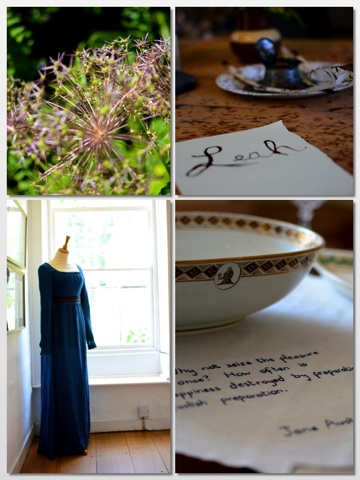 A walk through this 17th century house gives insight into Austen, her family, and life during that time. Even if you’re not an obsessed fan of the legendary author, it’s certainly worth a look. 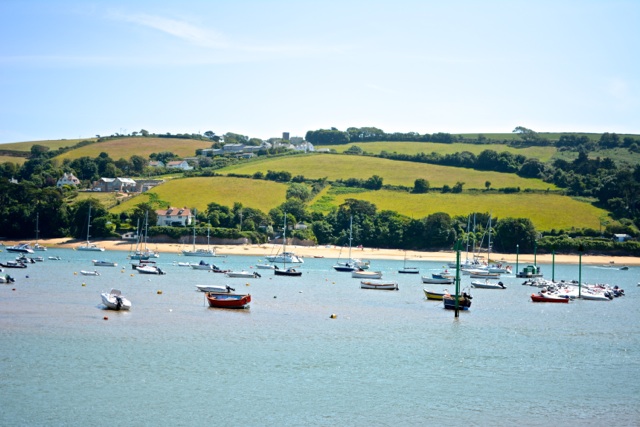 I really had no idea what to expect from the English coast. I figured it would be rugged, and I envisioned something like the Dingle Peninsula in Ireland. I do know that whenever I told a person from England that I was going to Salcombe, they gushed about its beauty and assured me what a lovely time I would have.

Southwest of London and nearly to the southernmost tip of the UK, Salcombe is located in Devon. It’s a trek to get to there given its remote location and ridiculously narrow country roads, but certainly worth it. The drive into Salcombe is picturesque with its patchwork rolling hills, tree-lined roads, and grazing cattle. I would have been content with that, but there was much more beauty to come. 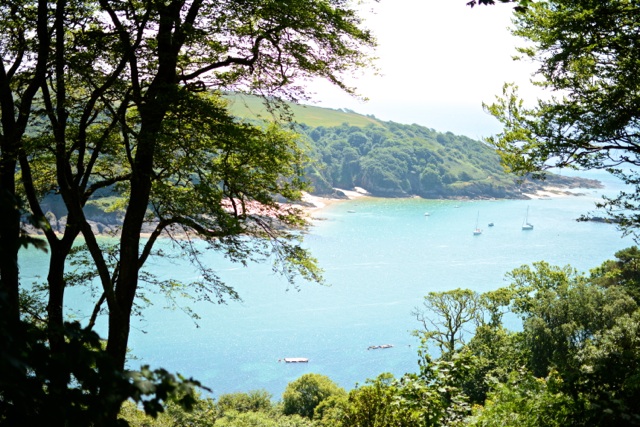 I caught my first glimpse of the ocean once I arrived into Salcombe. Located on the top of the cliff, I was able to get panoramic views of the surprisingly calm, blue water, boats and sandy beaches. Yes, there actually are sandy beaches in England. I would have never guessed!

Salcombe is a sweet little town. While I was there, it was filled to capacity with visitors taking advantage of the unseasonably warm and sunny weather. A surprising number of outstanding shops line the main street in town, including the original Jack Wills. Small restaurants selling fresh seafood are sprinkled in with the stores, as are pubs and gelato shops. It’s a great place to spend a leisurely afternoon. 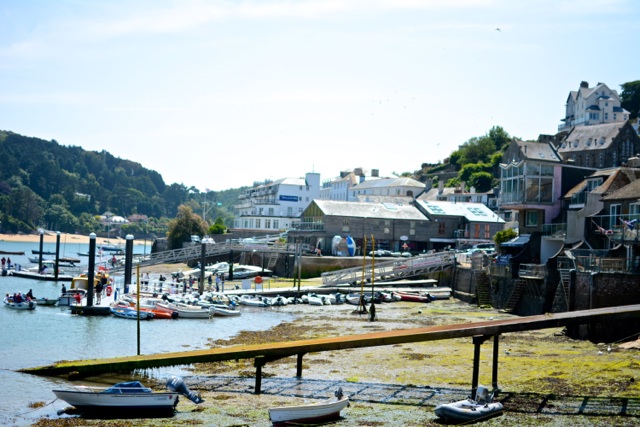 A day trip to Salcombe is not necessarily feasible, plus it would be a shame not to spend the night. The South Sands Hotel is the perfect place to lay your head while in town. Located in South Sands Bay directly on the beach, this boutique hotel is absolutely lovely. With only 22 rooms and five beach suites, personal attention is considered a standard amenity. 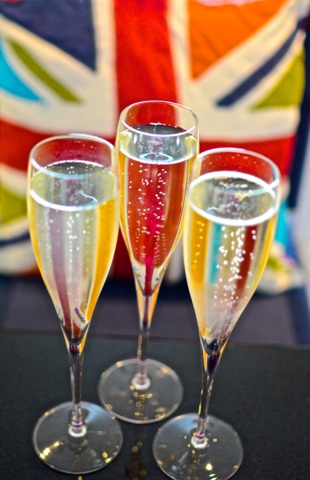 I stayed in a two-bedroom beach suite that overlooked the ocean. Decorated in a classic New England way, I was smitten. A large framed American flag hangs on the wall and made me feel at home, while Union Jack pillows reminded me that I was still in England. Sliding glass doors open up to a small deck with chairs. There also is a direct path to the beach, which is a nice touch. 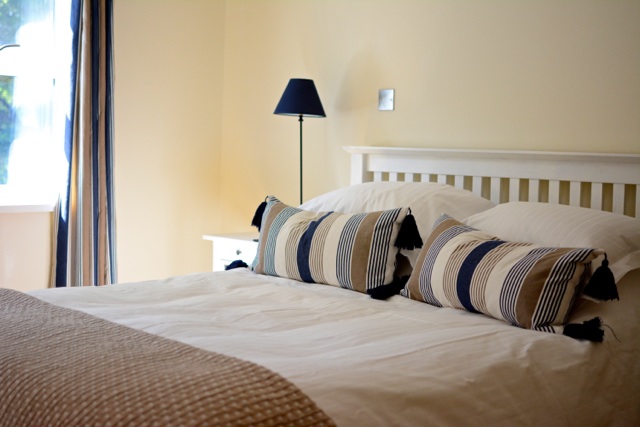 The South Sands’ restaurant is casual and features amazing views of the beach. If it’s warm enough, there is deck seating for dinner or simply a cocktail or two. As one would imagine, the menu is filled with the freshest seafood from the area. Deliciously designed by seafood expert, Mitch Tonks, I particularly enjoyed the raw oysters {so different than those from the Gulf of Mexico} and the scallops. 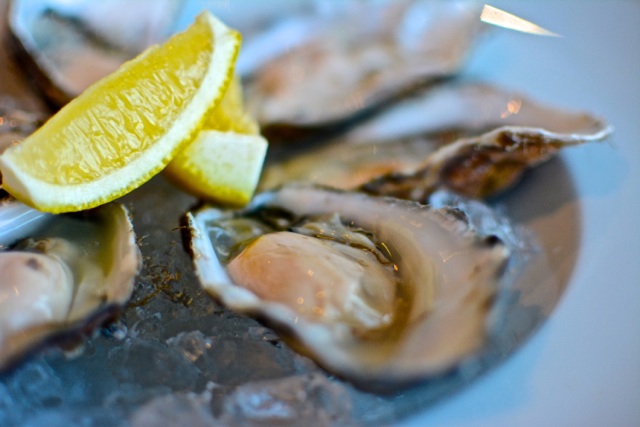 Though Salcombe is quite the excursion from pretty much anywhere in the UK, it’s one that’s worth the time. This stunning seaside town made me want to return, and judging by the crowds, I’m not the only one. 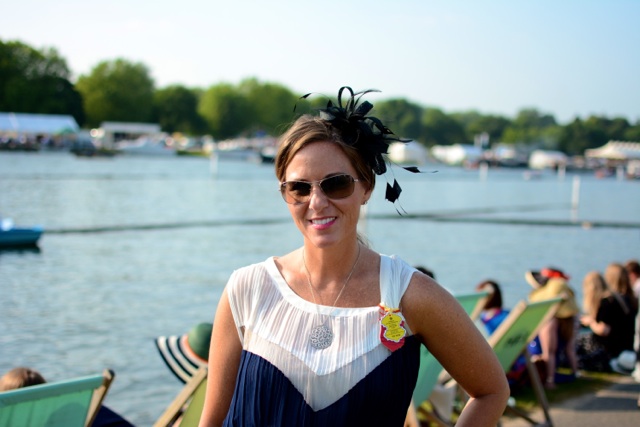 I still love London, but there’s so much more to England than its capital city. Perhaps on the next leap over the pond I’ll see what kind of treasures I can find in the north. And I’m bringing my fascinator with me!

I was a guest of Hobbs of Henley, Orwells, the Four Seasons Hampshire, and South Sands Hotel. In no way was I swayed by the postcard-worthy weather, glasses of Champagne, or the tremendous personal attention I received. As always, opinions are mine.