Entry into Switzerland was a less than an auspicious occasion. In an Ambien cloud, I muddled my way through customs where I received my prized Swiss stamp. My wherewithal was definitely screwed up, so I simply followed the crowd to baggage claim.

My giant, black suitcase was easily spotted thanks to the thick, red strap that encircled it. I was grateful that mine was one of the first pieces to come out because staring at the revolving belt made me a bit dizzy and nauseous. It was 7:00 am and the Geneva airport was quiet. I had a couple of hours to kill before Mrs. O would join me from England. Somehow I spotted an incredibly uncomfortable-looking row of plastic chairs lining the wall in the baggage claim area. As quickly as possible in my drugged state, I made my way over to claim a seat.

Exhausted and quite frankly, a bit high, I managed to create a somewhat comfortable sleeping arrangement. I suppose if I were to resign to laying on the floor of an airport, it would be in Geneva {or Singapore} given it’s spotless condition. Instead, I rolled my suitcase in front of me and placed my pink neck pillow on top. Then I used my J. Crew wool coat as a tent. With the straps of my backpack looped through my right leg and the strap of my Louis Vuitton looped around my left, I immediately went to sleep. I’m sure I looked ridiculous, perhaps like a high-end homeless person, but I didn’t care. With my Bose noise-cancelling headphones on I barely noticed the five other flights, along with the hundreds of other passengers that had come and gone through my sleeping quarters. 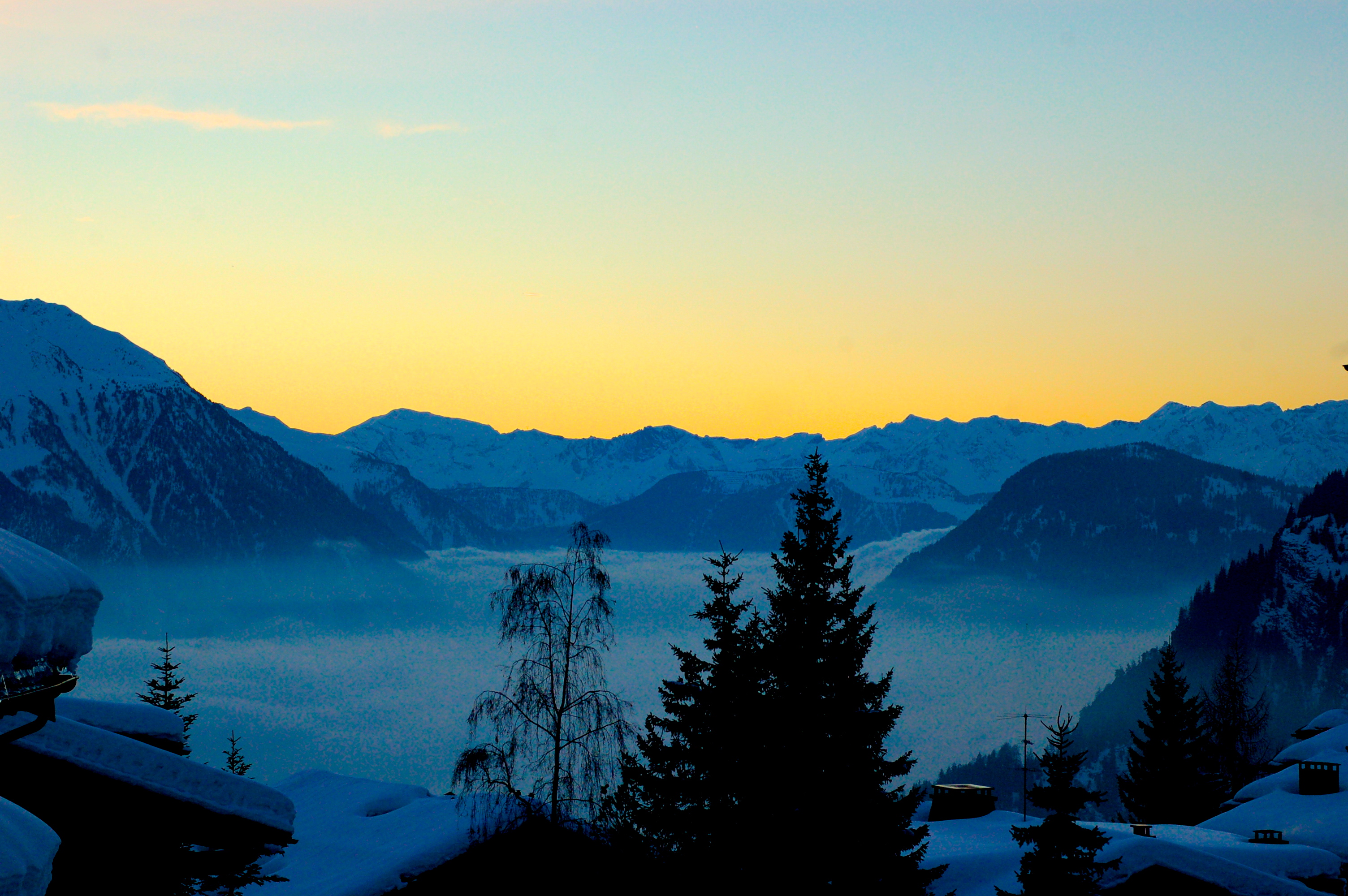 After a solid hour and a half nap, the Ambien wore off enough for me to realize that I needed to use the bathroom and more importantly, that I needed coffee. Soon after taking care of both needs, a text from Mrs. O signaled her arrival. I gathered myself and my make-shift squatters den and left the quiet confines of baggage claim. Refreshed and somewhat renewed, I spotted Mrs. O. With all of our luggage, bystanders probably thought that we were in Switzerland for a month rather than four days.

Fortunately, the train station is conveniently located in the Geneva airport and our train to Verbier St-Bernard was waiting. Swiss timing is no joke, as our train pulled away from the station at precisely 10:24 am on the dot. After an hour and a half ride that hugged the shores of beautiful Lake Geneva, we stopped at Martigny where we switched to the Grand St. Bernard Express. The air was decidedly crisp, but the clouds that blanketed the lower elevations were gone and the sun was bright. Thirty minutes later and we arrived to Le Châble, the station located at the base of the Verbier mountain. 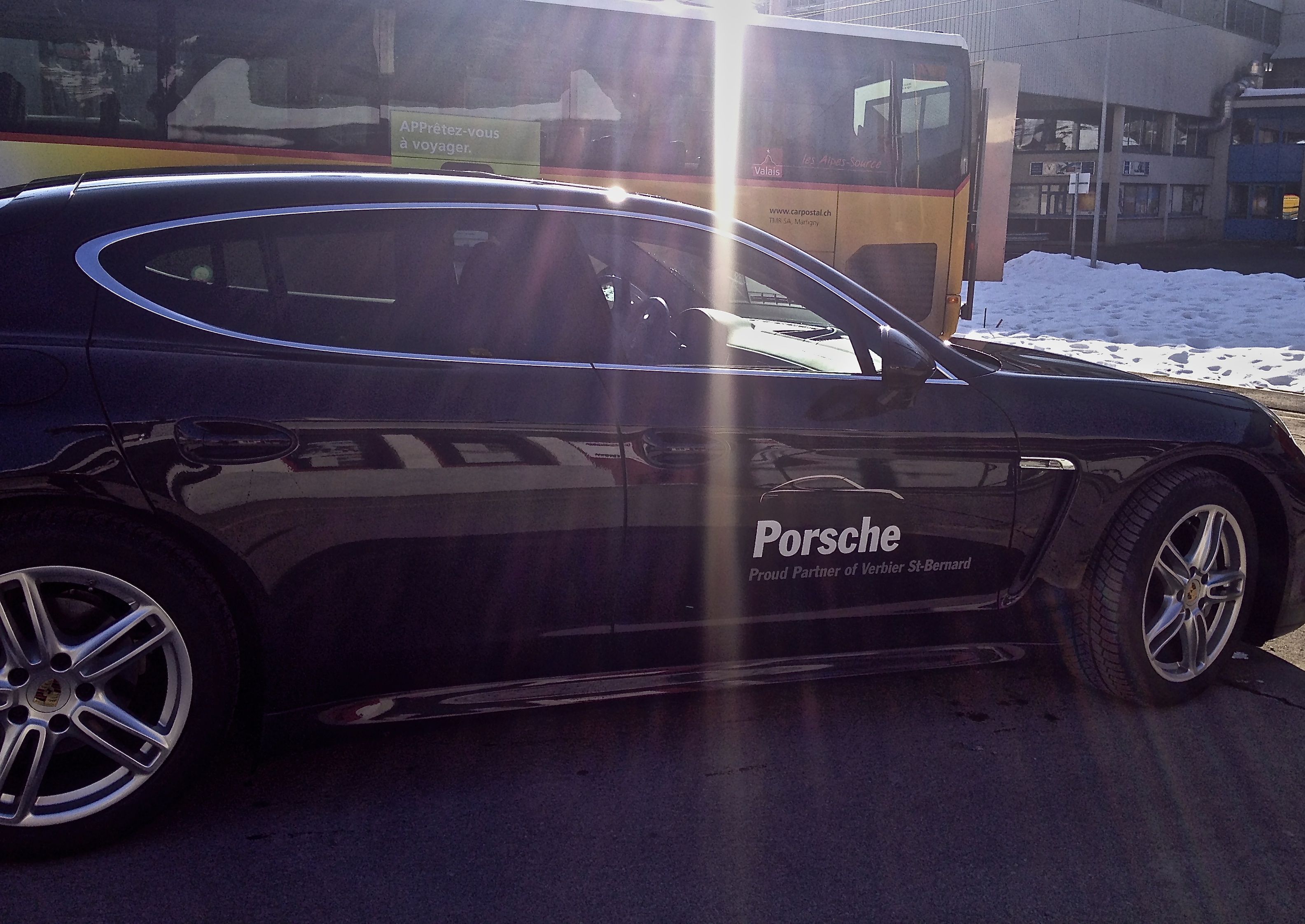 Instead of taking the cable car that runs from Le Châble to Verbier, Mrs O and I were greeted by Yan, the CEO of Verbier St-Bernard, and his Porsche Panamera. I cringed at the thought of loading down that fine car with our enormous baggage, but Yan crammed it in without batting an eye. I happily piled into the back of the Porsche for the ten minute drive to Verbier.

On a road filled with more hairpins than a beauty shop, I started to get a bit carsick. Normally quite chatty, I sat quietly trying not to get sick. It seems as if the Ambien hadn’t completely worn off. Fortunately the ride was short and the chilly mountain air jolted me back to my usual self.

Just 100 meters from the ski lift was my hotel, Le Chalet de Flore. Recently renovated and reopened, the hotel’s lobby smelled of fresh-cut wood. The wall of floor-to-ceiling sliding glass doors allowed the sunlight to pour in and provided an unmatched view of the Alps. Le Chalet de Flore made a seriously great first impression. Evelyne, a beautiful and slight Swiss woman, greeted us warmly. In no time at all, my bags were gone, I had a key in my hand, and I was escorted to my room just one floor below the lobby.

When I opened up the door, I hardly noticed the thoughtfully decorated room, the modern bathroom with double sinks, or the basket of vibrant oranges that sat on the table. It was the floor-to-ceiling windows, balcony, and view that stole my attention. It was the same view from the lobby, but this one was better because I didn’t have to share it. From my bed I could stare out that window all I liked. I imagined that I would never get tired of that view. 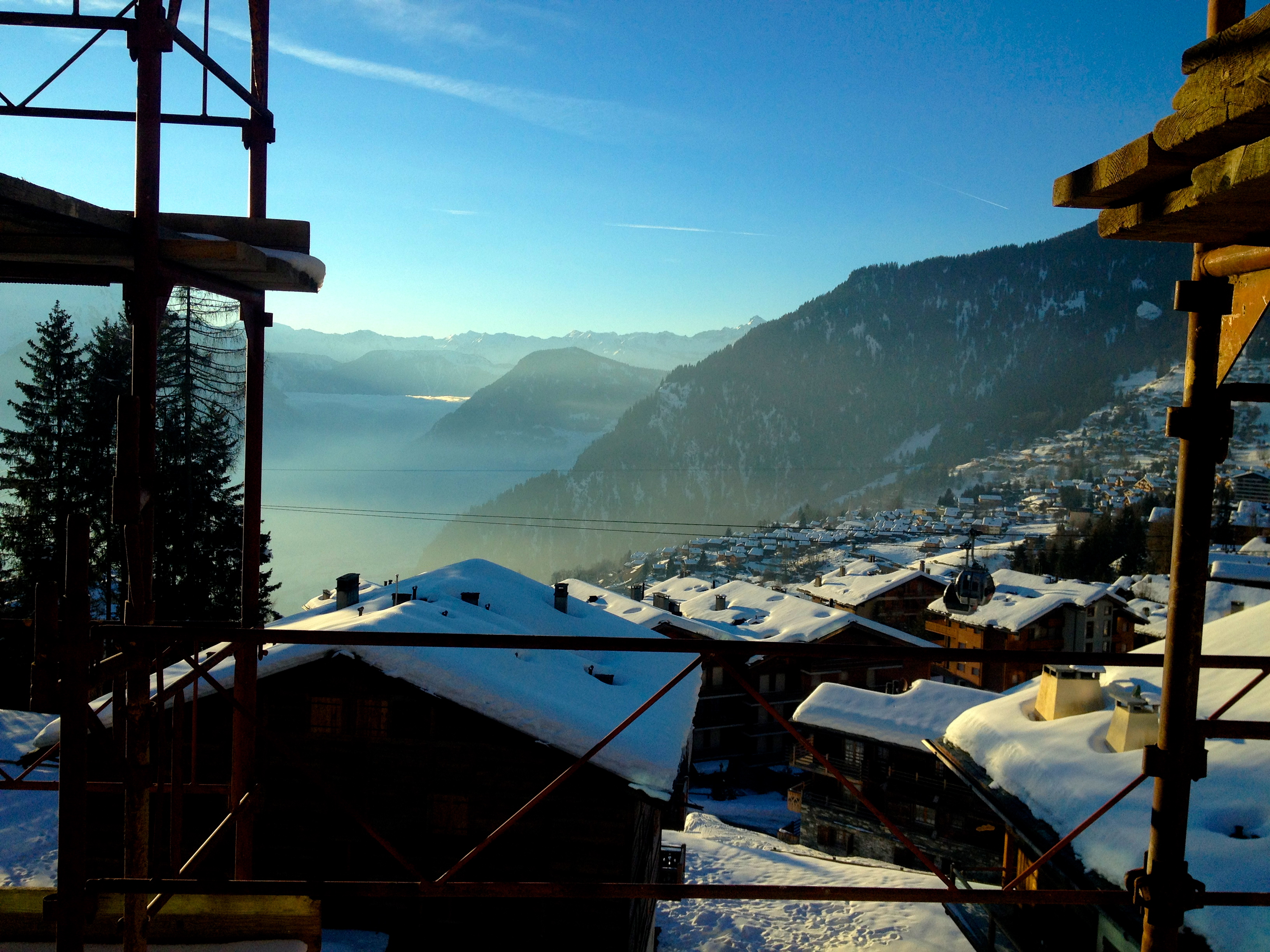 With all the traveling I realized that I hadn’t eaten. Although Le Chalet de Flore doesn’t have a restaurant, Evelyne prepared a spread of meats, cheeses, breads, and Swiss wine. Yes, SWISS wine. Until then I was ignorant of the fact that the Swiss do make wine, and good-tasting wine to boot. I especially enjoyed the pinot noir, but the white was just as nice.

As we ate and sipped on our wine, Mrs O and I relaxed in the comfortable orange chairs and stared out the window. I, still in a bit of a haze, couldn’t believe that I was actually in Switzerland looking at one of the most beautiful landscapes I’d ever had the privilege of seeing. Was this reality? It certainly was a ‘pinch me’ moment.

It was 2:30 and we had plans to meet Isabelle, the Communications Director for Verbier-St Bernard, to take a tour of the new W Verbier hotel at 4:00. After a quick shower and an even quicker nap, Mrs. O and I were back at it. There’s no rest for the weary. A short walk brought us to the W. Under construction and set to open in December 2013, the W Verbier will be the first from the chain to be built in the mountains.

A true ski-in-ski-out hotel, the W is located just beneath the chair lift. In our 30-minute tour led by Pierre, the Marketing and Communication Director for Les Trois Rocs, the company responsible for the W project, Mrs O and I were able to see plans and its current raw state. With a mix of Swiss chalet and New York energy, the W Verbier will be unlike any other property in the world. I couldn’t help but hope to be invited back to see the completed version.

The sun was starting to disappear behind the majestic Swiss Alps and we had dinner plans. Back to the hotel Mrs. O and I went to freshen up and add a few additional layers of clothing. On this Thursday evening, Verbier was quiet. I imagined that the next night would be anything but. 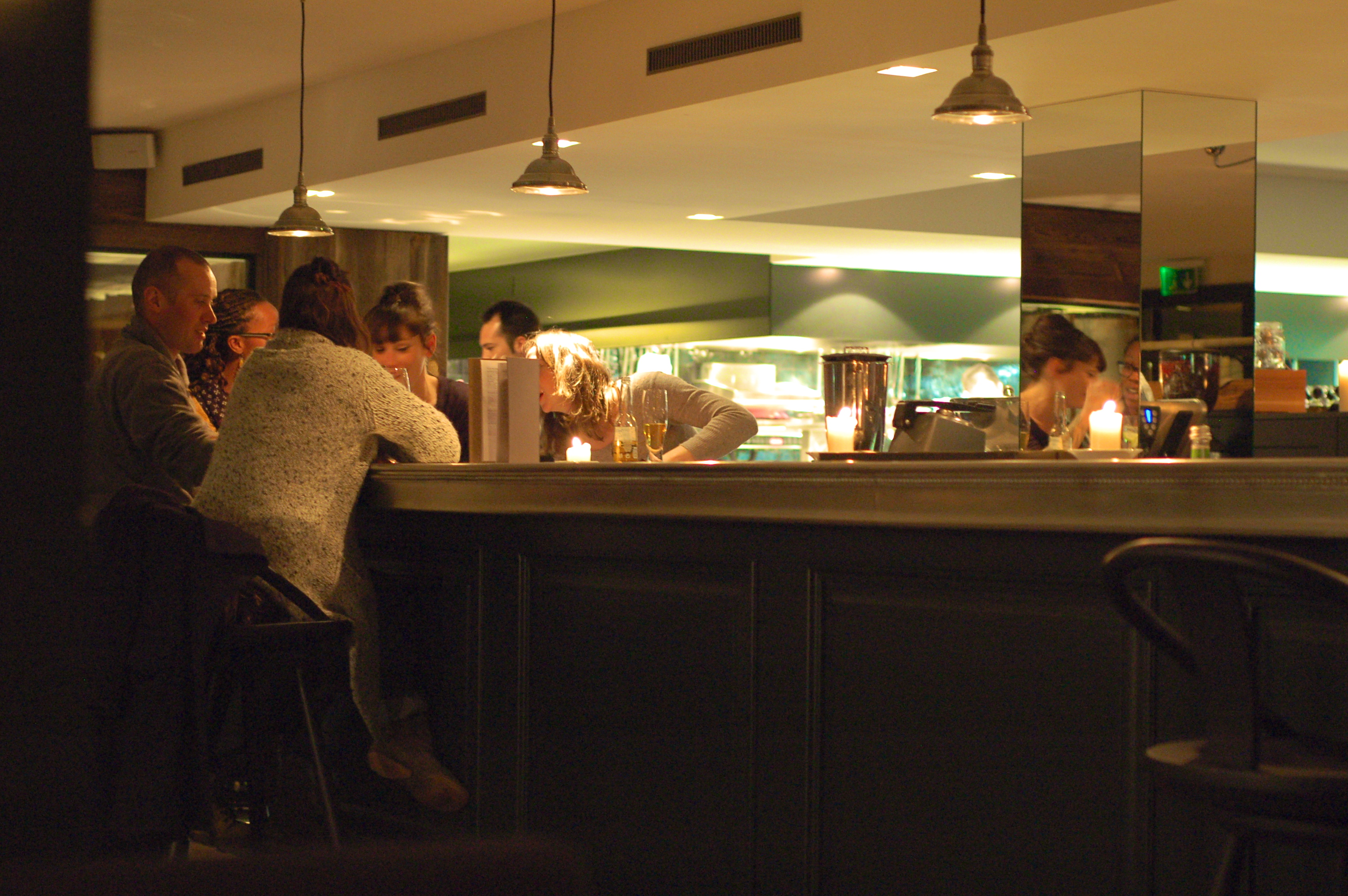 On our walk to La Cordée, I discovered exactly what cold was. I couldn’t remember a time when I’d experienced such a feeling, one that resonated down to my bones. I loved it. The frigid air was invigorating and such a change from the 70 degree heat I’d just left in Houston. This, after all, was Switzerland in January. I’d dreamed of visiting a winter wonderland for as long as I could remember.

“Verbier is straight out of a storybook,” I thought.

Located inside the new La Cordée des Alpes, La Cordée’s warm, modern, ski lodge feel welcomed me. As I peeled off my many layers at the bar, I looked around to see a bounty of beautiful people. Perhaps this was the place to see and be seen or maybe the stereotype of stunning Swiss people was true. Either way, it was a bit disconcerting considering my haggard feeling and giant bags under my eyes. After a quick look at the drink menu, Mrs. O and I quickly decided on a mojito. Nothing screams Switzerland like a mojito, right?

Shortly after finishing our drinks, Lola and Yan joined us. Lola’s flight into Geneva was a bit later than ours, so she was just arriving. We were quickly seated and handed menus. The only thing I knew of Swiss food was fondue and raclette, so I was eager to learn more. Choices consisted primarily of meat with vegetable sides. I had a hard time choosing, but decided on the pork belly with artichokes, while the others had steak, chicken, and fish. 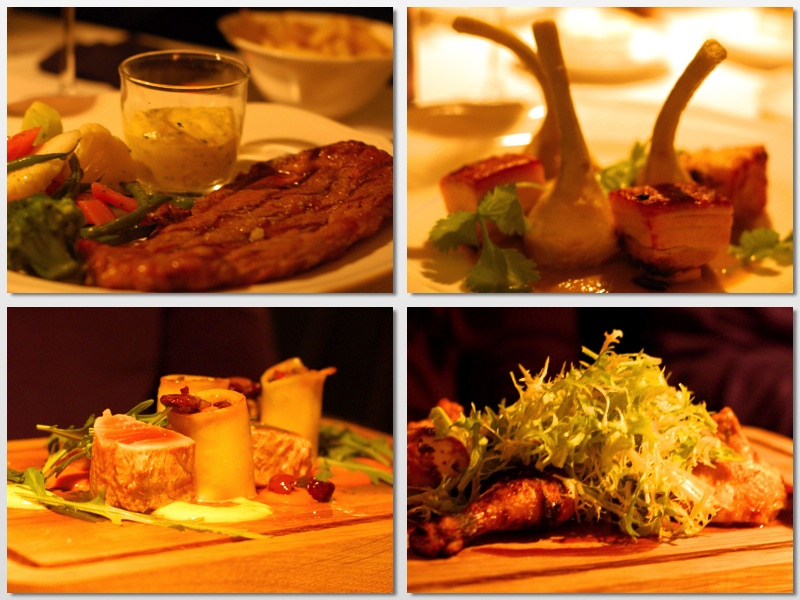 There was no shortage of wine or conversation, but we’d had a long day. The morning would come very soon and there was a full day of skiing ahead. After a quick tour of the La Cordée des Alpes’ beautiful spa, it was time to call it a night.

I piled on my hat, scarf, coat, and gloves, and left the warm confines of the restaurant. When I walked outside, my lungs felt as if they would explode. It was much colder than before and a light snow was falling. I glanced up towards the side of the mountain and saw the snow-covered chalet roofs glistening in the moonlight. The silence was deafening and the view was surreal.

In that very moment, I knew I’d found perfection in Verbier. It was everything I’d hoped, yet nothing I could have ever imagined. I would sleep well that night knowing that my Swiss dream was indeed reality.

I was an invited guest of Verbier St-Bernard, but in no way were my opinions influenced by the movie star treatment or the gorgeous vistas. A heart-felt thank you is in order to all that contributed in making this trip so very special.