It may have taken twenty-four hours in Tokyo for me to figure out that the strange is actually normal, but I instantly knew that I wasn’t cool enough to even visit the city.

I had a couple of hours to kill before I needed to check out of the Conrad Hotel and get to Narita. I wandered around the Shiodome area near my hotel. Metal, concrete, and glass surrounded me. Everything looked the same. Modern. New. It was if I fell down a shiny rabbit hole.

A giant, glass cube on stilts caught my eye in the distance. As I walked closer to it, I realized that it was a television studio and there was a show being filmed inside. I decided that it was some sort of morning talk show, but I’m not talking about Kathie Lee and Hoda. This studio looked like a Crayola factory exploded. 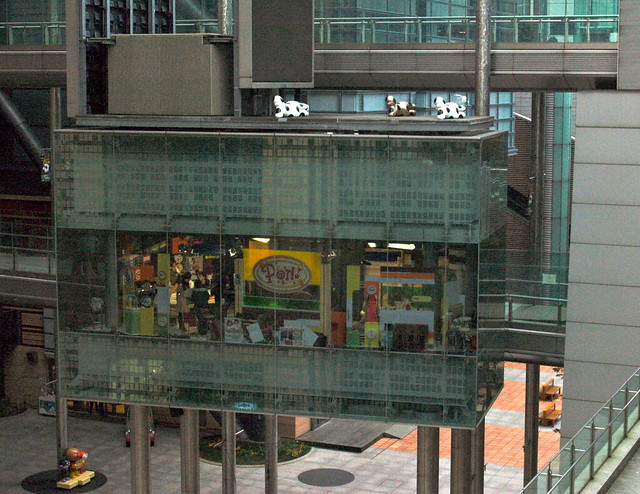 I got closer. Inside was a male and female live on air. They were incredibly animated and had on some crazy-looking outfits. Joseph and his Amazing Technicolor Dreamcoat would have been conservatively dressed in the company of these two. The show wrapped up, and I moved in for a better look. A crowd of young females were lined up outside of the studio. They were clamoring for a peek at what must have been some sort of Japanese heartthrob. 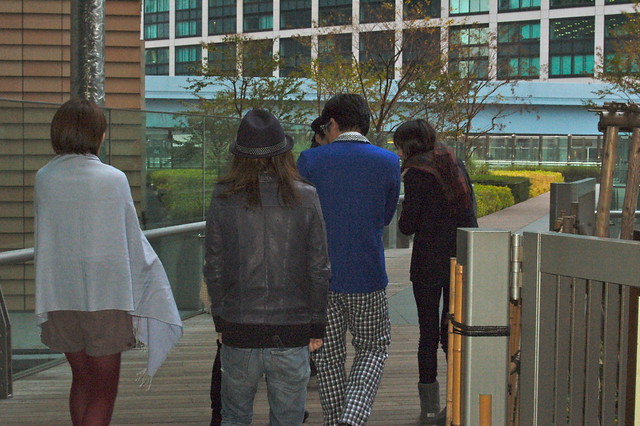 As the male host was escorted by security out of the glass cube, the girls squealed with delight. I raised my camera to take a picture of this apparently famous Japanese guy and a security guard quickly put his hand over my lens.

What? Was he serious? Did I look like I knew who that person was?

The Prince-clone of a TV host pushed his way through the crowd. He was followed closely by his make-up and hair team. I really wanted to find out who that dude was and what made him so special. Alas, I was only able to get a photo from behind. 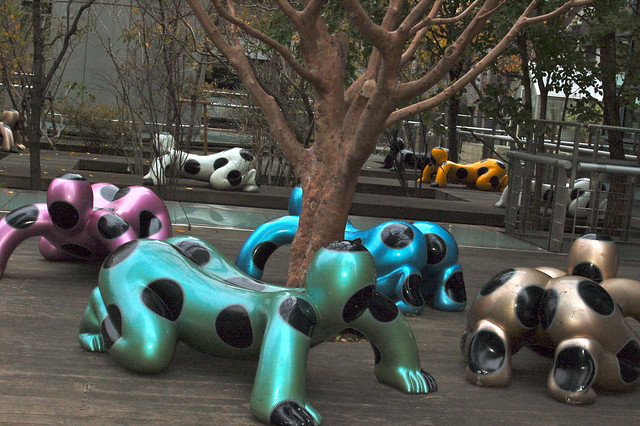 After that brush with an apparent celebrity, I wandered around the outside of the Nippon Television Tower. Imagine my surprise when I turned the corner and saw polka-dotted, multi-colored “people” on all fours. There were at least thirty of them scattered about a courtyard. I couldn’t decide if I should take a seat or make obscene gestures towards them.

This art was the strangest, most disconcerting thing I’d seen in a while. My mouth was agape trying to figure out what in the hell these things were. I decided that I just wasn’t hip enough to “get it” and with a shake of the head and a big belly laugh, I went about my business. 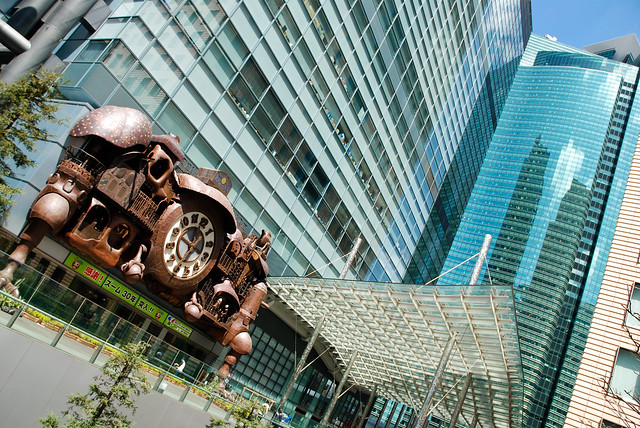 In the land of glass, steel, and all things shiny, around the corner from the village of polka-dotted people, and just down from the giant cube on stilts, was something completely out of place.

In the hour that I’d wandered around the Shiodome, you’d think I’d realize to expect the unexpected. However, I really wasn’t prepared for the massive mound of copper that was plastered against the Nippon TV Tower. I pointed. “What is that?” I looked closer. I even squinted like that would help. Then I looked away and far up into the sky; I saw the Conrad. THIS is what I’d seen last night from my hotel window. From the 32nd floor it just looked like a brown blob.

Far more than just a brown blob, this was a fantastical copper clock. It looked like it had been carved out of chocolate and belonged in Willy Wonka’s factory. There were so many details. What was this thing? I looked around for a sign (hopefully in English) to tell me anything about the clock. I didn’t have to search long before finding some information:

The windup hours are:

The show starts 3 minutes and 45 seconds before each hour. 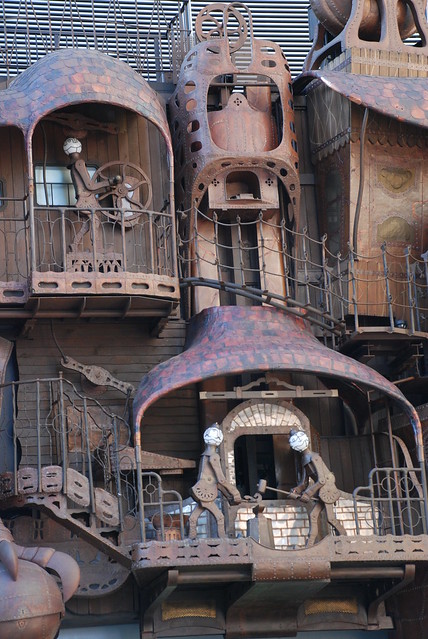 “Windup hours? This is a giant cuckoo clock!”

I glanced at my watch and it was seven minutes until noon. Perfect! I’d catch the first show of the day. I took to my iPhone to find more out about this clock. 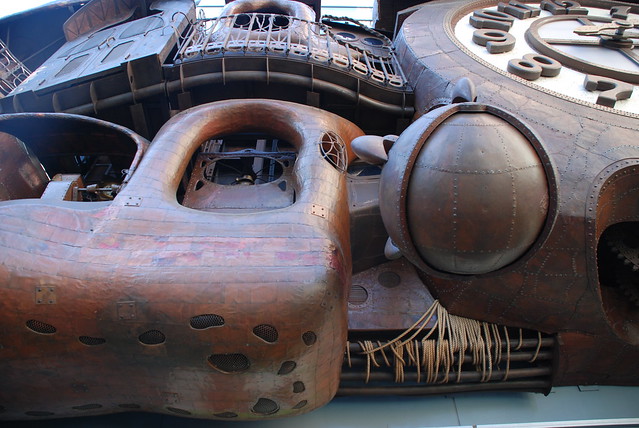 Designed by demi-god anime maker, Hayao Miyazaki, the Nittere Ohdokei clock was modeled after his famous movie masterpiece, Howl’s Moving Castle, which is some sort of Japanese animated fantasy film. This information meant nothing to me, although it did sound quite impressive.

“I’m so not cool enough to be here,” I thought. 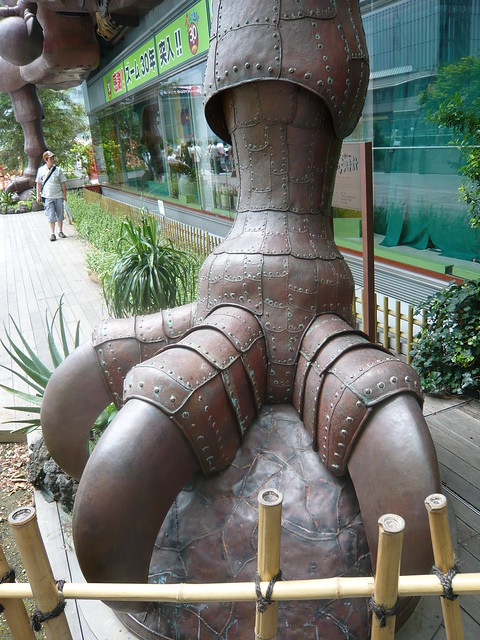 Massive in scale, Nittere Ohdokei is the world’s largest animated clock. At 32 feet high, 59 feet wide, and 28 tons, how could anything compare? Although designed by Miyazaki, the clock was sculpted by Shachimaru Kunio. I couldn’t imagine the time, energy, and talent required to construct such a thing. I was truly amazed. 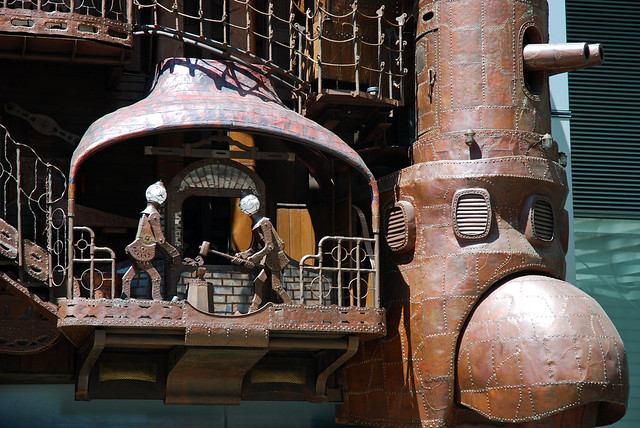 Apparently this guy, Miyazaki, is pretty famous for using steampunk elements in his movies. What the hell is steampunk? Thank goodness I bought that extra-large data plan. Google told me that steampunk is a sub-genre of science fiction. Well, that explained why I didn’t have a clue what it was. The mere thought of science fiction makes my brain bleed.

Nonetheless, steampunk uses speculative fiction, alternative history, and fantasy to construct a world where steam-power machines are widely used, and usually set in the Victorian or the Wild West Eras. Again, way over my head in terms of hipness. 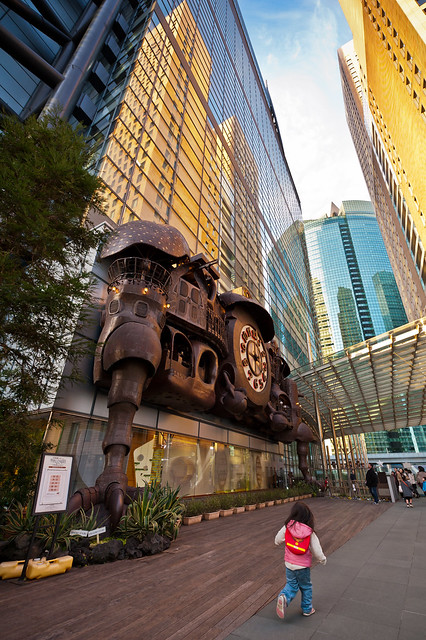 It was nearly noon, and almost time for the clock to come alive. As the second hand passed the Roman numeral nine at four minutes till noon, I heard a ding.

Suddenly to the left of the face of the clock, a humanoid with a bell for a head walked out of the darkness and looked around. The clock lit up and windows and doors opened and closed. Other humanoids hammered and rowed as if they were giving the clock the power to move. The dials of the clock started spinning as music played. The giant talons holding orbs moved about. For three minutes and forty-five seconds, I watched as the tiniest part moved. There was such attention to detail. I was certainly in awe.

I didn’t have to know anything about steampunk, anime, famous Japanese filmmakers, pre-teen Japanese TV heartthrobs, or funky polka-dotted people on all fours to figure out that the Nittere Ohdokei clock was badass.

I may not be some Harajuku girl who dresses like a gothic Lolita, but I can appreciate a giant cuckoo clock with the coolest of cool.