The State Fair of Texas in Dallas is where gluttony and the gridiron collide. The Red River Rivalry, named for the Red River that runs along the border of Texas and Oklahoma, is an annual football game between the Texas Longhorns and the Oklahoma Sooners. Originally named the Red River Shootout, this game has been played since 1900. That’s over 100 years of pure unadulterated hate brewing and festering for one another.

Inside of Fair Park lies the Cotton Bowl, game site since 1932 for one of the most storied rivalries in all of sports. Part of the appeal of the Red River Rivalry is that it is played in a neutral site. Dallas is located three hours south of Norman, home of the Sooners, and three hours north of Austin, home of the Longhorns.

Tickets are distributed evenly; half go to Texas and the other half to Oklahoma. At the game, there is a distinct division down the 50 yard line: burnt orange on one side and crimson on the other. I’ve already mentioned the near-castration altercation here. Much to OU fans dismay, Texas holds the advantage at 59 wins to Oklahoma’s 41; there have been five ties.

Another draw is that this game often has national title implications. The winner is seen to have an advantage in winning the Big XII South, the conference championship game, and a shot at the BCS National Title. There’s other hardware on the line too: the Golden Hat (a golden cowboy hat), the Red River Rivalry trophy, and the Governor’s Trophy. All are coveted, but probably none more important than bragging rights earned for the next year. Whether you’re at the game, in Fair Park, or walking down the street, you’re going to hear chants of “Texas Fight” and “Boomer Sooner.” 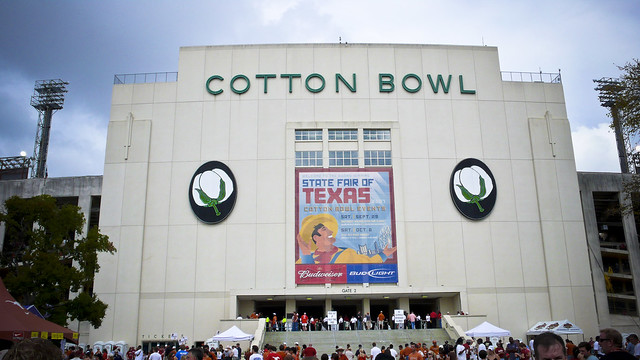 There is no doubt that the Texas State Fair wouldn’t be the same without the UT-OU (or OU-UT, whichever you prefer) game, but the fair might as well close its doors without the food vendors. Famous the world over for its variety of fried food, the State Fair of Texas has the market cornered on artery-clogging delights. Fried bubblegum anyone? What about fried butter? Fried Coke? Fried beer? Fried bacon? Fried PB&J? Yep. Where else but Texas can one find such coronary-inducing combinations? 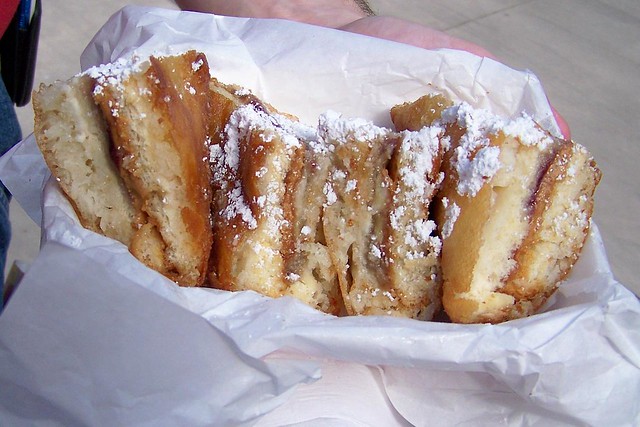 The Red River Rivalry is an 11:00 am start time this year, and the fairgrounds open at 7:00 am. The earlier you arrive, the better, because traffic and parking can be a pain. Plus, you’re not going to want to miss any of the pre-game festivities and people watching opportunities. Often ESPN’s Gameday broadcasts live from the Cotton Bowl for their 9:00 am show. Bring a sign, wear burnt orange or crimson, act crazy, and you’re sure to be on TV. 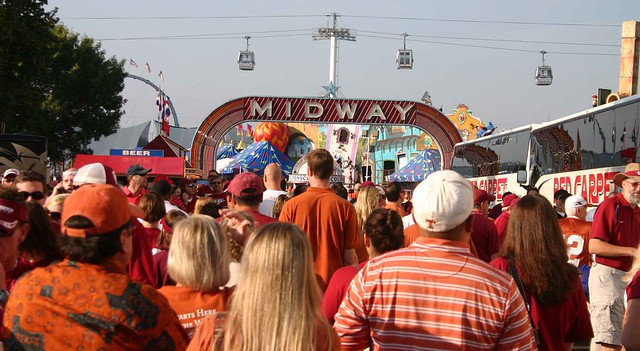 The Red River Rivalry doesn’t have your typical game-day tailgating scene. Since the Cotton Bowl is located within the grounds of Fair Park, most people skip the tailgating and grab their beer and food from vendors. The Texas-Exes have a pre-game celebration located near gate five starting four hours prior to game time (7:00 am). There are radio broadcasts, food and drinks for sale, and admission is free.

Tickets: The Red River Rivalry has been a sell out every year since 1941. Stubhub or another ticket seller may be your only option. Get out your credit card; tickets are in high demand, thus expensive. Face value starts at around $110. You’ll most likely pay much more than that, even for the worst seats. Remember, fair admission is included in the price of the game ticket. If you can’t or won’t fork over that kind of money, you can still enjoy the atmosphere of the game by purchasing a $16 general admission ticket (or $13.95 advanced purchase) to the fair and watch it on big screens throughout the fair grounds. 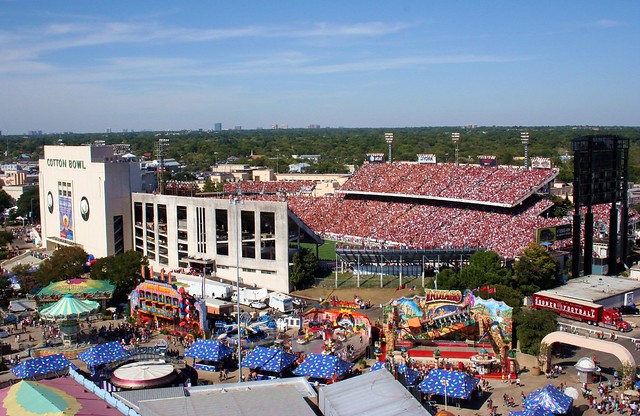 Transportation: Official State Fair parking lots cost $15 and valet is available for $30. If you don’t park in an official lot, make sure the lot you do park in has a City of Dallas parking permit; you could be towed otherwise. Avoid the traffic and the headaches all together and take DART (Dallas Area Rapid Transit) to Fair Park.

Coupons: The fair runs on a coupon system; you must purchase coupons in order to buy anything. Coupons are $.50 each and come in sheets of 20. Beware. Lines are crazy long on game day. What do you expect when well over 100,000 people converge on one site? Credit cards are accepted, but the cash lines are normally shorter. Bring cash. Lots of cash. 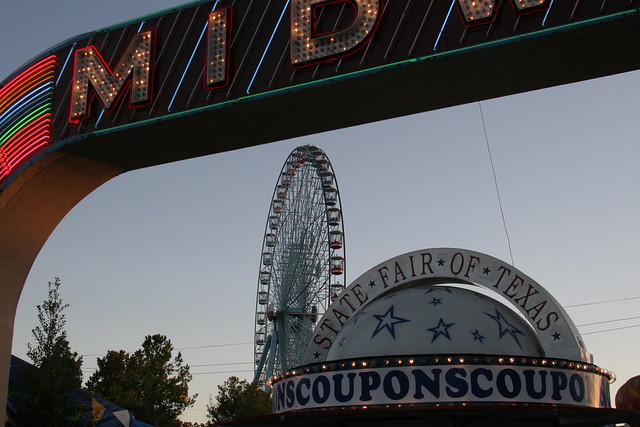 The Tunnel: There is one way on and one way off the field at the Cotton Bowl, and it’s known as “The Tunnel.” Unfortunately for Texas, The Tunnel runs under Oklahoma’s side of the stadium. Everything you can imagine is hurled in Texas’ direction…insults, beer, nachos. Josh Norman, a former Sooner described the Tunnel experience: “Walking down the tunnel and standing next to the guys you’re about to face on the field is awesome. Then you hear the (guns) shooting and you hear the crowd; half is screaming for OU and the other half is booing. It gives you a rush.

On Friday night there is a great party atmosphere with fans of both schools roaming the streets of the West End and pouring out of its restaurants and bars. Uptown/McKinney Avenue is also party central. The Texas Exes organization holds several events during the weekend, as does the OU Club of Dallas.

Two things you can’t miss seeing at the fair are Big Tex and the Texas Star Ferris Wheel. The saying, “Everything is bigger in Texas” holds true with these two state icons. Big Tex, a 52 foot tall talking cowboy, has greeted fairgoers since 1952. The Texas Star was introduced in 1985 and is the largest ferris wheel in North America. Take a ride; it offers wonderful views of Fair Park and the Dallas skyline. 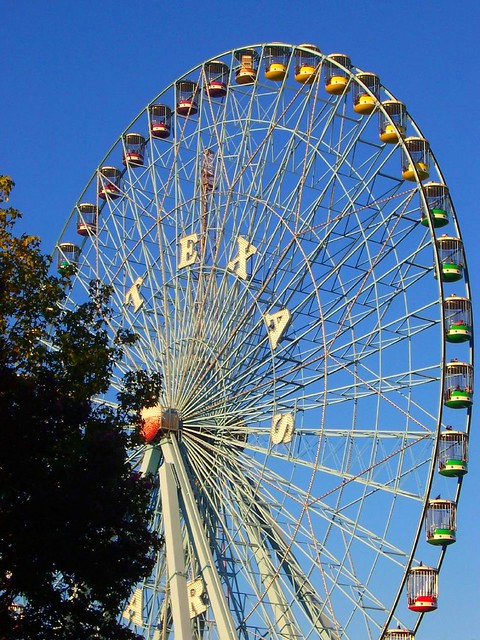 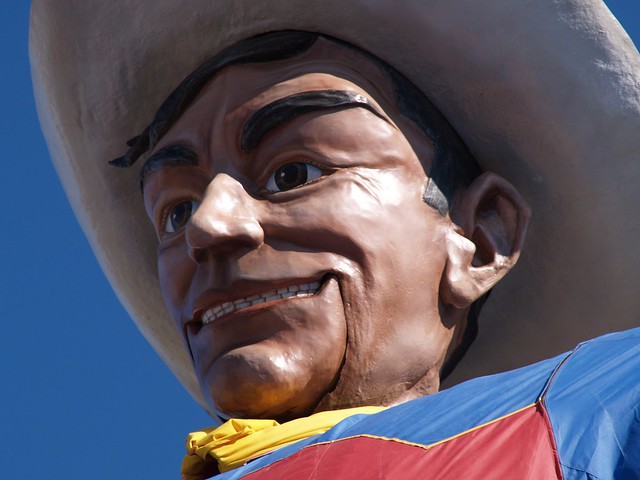 Approximately three million people visit the State Fair of Texas each year bringing an estimated $350 million into Dallas. A huge draw is the food. Every year vendors vie for the titles Best Taste and Most Creative. This competition, known as the Big Tex Choice Awards, has spawned some of the strangest and best-tasting combinations around. 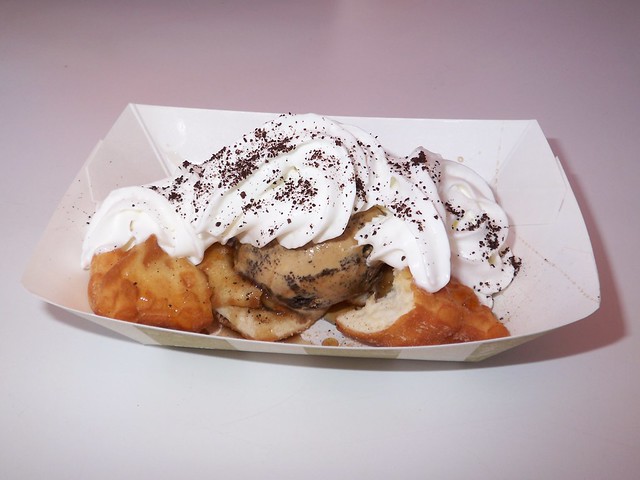 The 2011 winner for Best Taste was Buffalo chicken in a flapjack. It’s described as “a Buffalo chicken strip coated in flapjack batter, rolled in jalapeno bread crumbs, deep fried to a golden brown, skewed, and served with a side of syrup.” Well, who wouldn’t like that? Most Creative was awarded to fried bubblegum. It’s “a light-as-a-feather bubble gum-flavored marshmallow dipped in batter and lightly fried to perfection, decorated with a swirl of icing. A final sprinkling of powdered sugar completes this treat.” Other entries were deep fried pineapple upside down cake, deep fried Texas salsa, el bananarito, fried autumn pie, Hans’ kraut ball, and the walking taco. 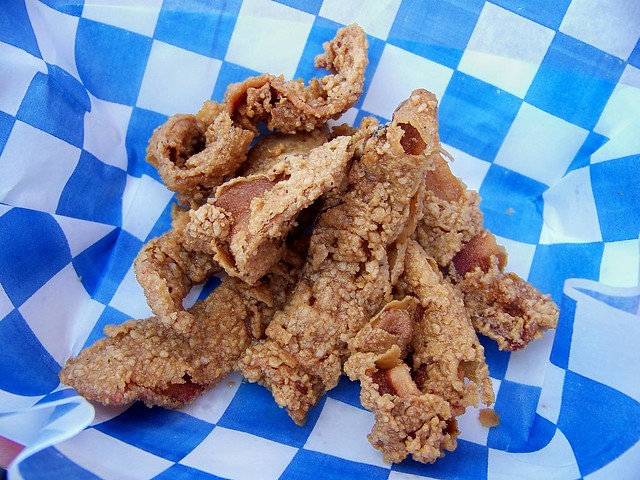 You’ll want to try at least one of the new items, but you can’t leave the fair without having a Fletcher’s Corny Dog. They’re the inventors of the corny dog and have been serving them at the State Fair of Texas since 1942. According to Fletcher’s Website, “…approximately 500,000 Corny Dogs are sold at six Fletcher’s locations, requiring about 3,000 gallons of peanut oil. If laid from end to end along Interstate 45, these dogs could reach from Fair Park to the Gulf of Mexico. Mustard is still the proven favorite among condiments with 1,500 gallons used annually.” 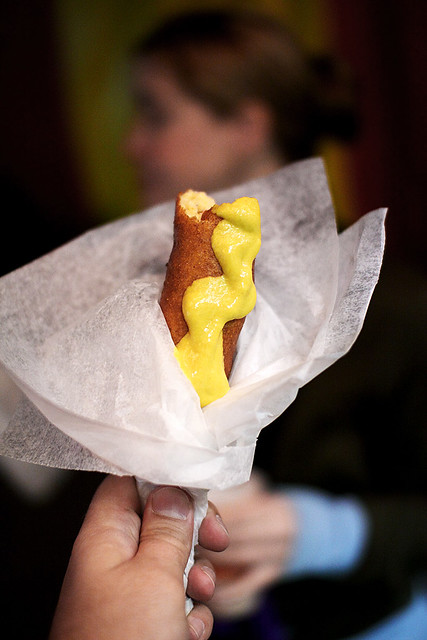 Other than food and football, the fair has hundreds of other activities, many of them free. There are rides on the midway, livestock competitions, shopping, a car show (biggest in the Southwest), pig races, dog shows, concerts, garden exhibits. The list goes on and on. Check the fair schedule for more information. 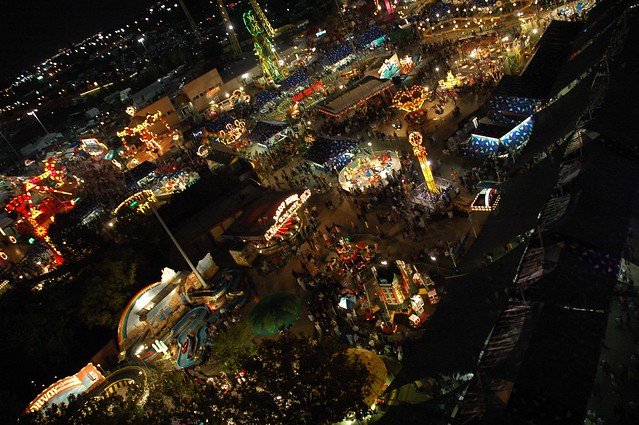 Out of the 24 days that the State Fair of Texas runs, one of those stands out from the rest. The Red River Rivalry not only captures the attention of Texans and Oklahomans, it also takes center stage in the football world. Some of the best football players and coaches in history have made that heart-stopping trip down The Tunnel into the Cotton Bowl. Even if you’re not a Longhorn or a Sooner fan, you’ll appreciate the passion, recognize the history, and dine on some of the craziest stuff you’ve ever seen.