Between the Willamette Valley, the Cascade Mountains, and the Oregon Coast Range, Eugene, Oregon defines the beauty of the Pacific Northwest. Eugene is framed on three sides by Douglas fir forests that have helped it earn the moniker, “ The Emerald City.” The Willamette River, which cuts the city diagonally, is surrounded by a park and greenway system perfect for jogging, walking, and biking. Natural beauty is everywhere you look in Eugene.

Autzen Stadium, aka “The Zoo”

Eugene is known as “Track Town USA” for its rich track and field history; it is the epicenter for the sport. Hayward Field has seen the best track athletes in the world and has been the home to U.S. Olympic trials and national championships. Perhaps just as famous in its own right is Autzen Stadium. Known throughout the nation as one of the toughest and loudest places to play, Autzen packs a big punch. Its 54,000 capacity stadium has an intimate feel compared to those twice its size (Michigan), but apparently at the University of Oregon, big things come in small packages.

The rivalry with Washington is fierce. Real hatred lies in this border war. There’s also the heated  instate rivalry with Oregon State. The Civil War, as it’s commonly known, has been played since 1894.  Just forty miles separate the two schools, which just adds fuel to the fire. If you want to witness one of the bitterest rivalries in sports, plan your trip to Eugene in an odd year; that’s when the Civil War is played in Eugene.

There is tailgating near the stadium, but those parking lots require passes and are reserved for donors. By all means, take a walk through and check it out; lots open four hours to game time. For the everyman, the Masonic Lodge across from Autzen sells tailgating spots in their large parking lot. They also don’t limit tailgating to just four hours before game time.

You’ll want to be aware of the open container laws in Eugene. Open containers are ok on private property if you’re over 21. The minute you step into the street or onto the sidewalk with an open beer, you are breaking the law. If you see the police heading your direction, don’t toss your drink; they’ll get you for littering as well. The only exception to this law is in the donor lots at Autzen.

Thousands of excited Duck fans walk from campus literally over the river and through the woods to get to Autzen. It’s a game day tradition. The Players March to Victory takes place two hours prior to kickoff and includes the cheerleaders, coaches, the Green Garter Band, and the Duck. Cheer on the team as they walk down the Mo Center central boulevard to their locker room. 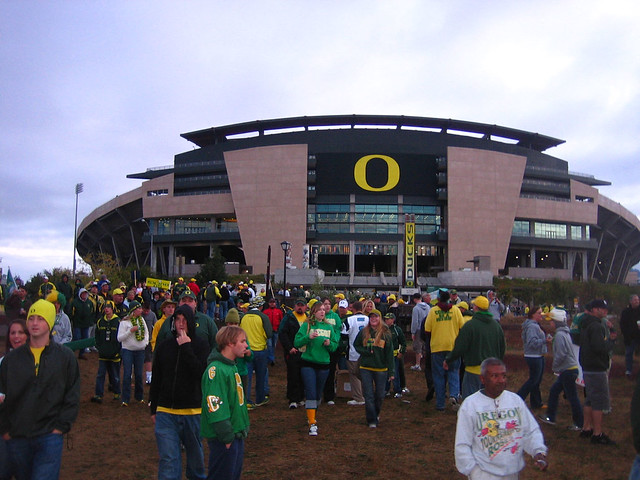 The University of Oregon is a Nike school. Correction. The University of Oregon is THE Nike school. Phil Knight, the founder and chairman of Nike, is a graduate of Oregon. Everywhere you look, you’ll see the Nike swoosh,but the most visible influence Nike has is on the Ducks uniforms. Always on the cutting edge of style (and some may say taste), Oregon rarely, if ever, wears the same look twice. And why would they need to? Part of the fun of watching the Ducks play is to see what their uniforms look like.

Have you ever wanted to see a giant duck leading a team out onto a football field riding a Harley Davidson? If you’re in your seat prior to kickoff in Autzen, you’ll have your chance.

Ladies and gentlemen, Autzen is loud. There may be only 54,000 people there, but each one of them is screaming. LSU’s Death Valley? Florida’s Swamp? Yeah, they’re loud, no doubt. But at Autzen, it’s like Duck fans’ screams are amplified with microphones. The Sporting News calls it the #1 most intimidating place to play. Keith Jackson of ABC Sports says that Autzen is, “Per square yard, the loudest stadium in the history of the planet.” NFL star and former Oklahoma Sooner, Adrian Peterson, described his experience at Autzen as “… like some sort of crazy torture in the movies. How do people do that so long without taking a breath? I think my ears are still ringing.” In Autzen Stadium, yelling is an art and the Duck fans are Van Gogh.

Eugene has seemingly endless recreational, cultural, and shopping opportunities. With over 250 miles of walking, jogging, and biking paths, Eugene is rated as one of the top ten best cycling cities in the US. In the park and greenway system bordering the Willamette River, there and four pedestrian/bike-only bridges connecting both sides of the river, creating a loop system. There are also over 100 other parks with trails to discover, including Hendricks Park, with its famous rhododendron garden. North of town, the McKenzie River provides an opportunity for rafting, tubing, and fly fishing. Soak in Cougar Hot Springs, located about an hour outside of Eugene in Willamette National Park. Hike or bike the 14 mile Ridgeline Trail. You’ll be rewarded at the end by a spectacular view of the Willamette Valley from the top of Spencer Butte, elevation 2,054 feet.

There are plenty of cultural offerings in Eugene. From galleries displaying the creations of local and international artists to the Jordan Schnitzer Museum of Art at the University of Oregon, you’ll have the chance to see some wonderful works of art. There’s no shortage of musicians in the area either; check out area clubs, pubs, and restaurants for the opportunity to hear some live music.

Each Saturday from April through mid-November, Eugene’s Saturday Market is open. There you will find booths by local artisans, food, and music. Visit any of the countless Oregon wineries near Eugene, including Silvan Ridge, King Estate, Sweet Cheeks, and Noble Estate. Check their Websites for tasting room times and tour options.

If wine isn’t your thing, head to the Eugene City Brewery for a Track Town Honey Orange Wheat, or any of the 35 beers on tap. Brewery tours operate weekdays at 4:30. Ninkasi Brewing Company is open seven days a week for tastings.

Marché features locally grown or gathered food. Everything is seasonal and made from the freshest ingredients; make a reservation. If you’re going to King’s Estate Winery for a tasting, consider eating there as well. Similarly to Marché, seasonal and organic ingredients are used, most of which come from their 30 acres of organic gardens and orchards. For lunch, the KE Burger includes pepper bacon, tomato, and cheddar on house bun with pommes frites. They even make their own ketchup. Want to go all out? Add the foie gras and truffled fries. On a sunny day, sit outside and enjoy your meal with a bottle of their pinot noir.

Find the Dana’s Cheesecake Bakery booth at the Saturday Market. They’ve been serving up cheesecakes for 30 years. If you can’t make it to the market, but your sweet tooth is screaming, near campus is Prince Puckler’s Gourmet Ice Cream. Some of their best sellers include Mint Chip and Fresh Banana, but try Chai Tea or Black Tiger Stripes for something different. Grab some hand-dipped chocolate truffles at Euphoria Chocolate Company.

There’s no shortage of places to watch football and relax with a drink in Eugene. A close one to Autzen is The Cooler. It has an impressive 15-foot projection screen, perfect for prime football watching. Another option is O-Bar & Grill. It’s also near Autzen, and has a large collection of Duck memorabilia. It’s a pretty small place, so arriving even a couple hours before game time will not guarantee you a table. Sixth Street Grill has two sides: a restaurant and a sports bar. Although on game day, both sides are filled with football fans watching the flat screen TVs scattered throughout. Rennie’s Landing is located on the edge of the Oregon campus and is a student favorite. Pool tables, TVs, a full menu, and plenty of beer on tap make it a perfect place to hang out on a football weekend. Yet another suggestion is any of the three McMenamins: High Street, East 19th Ave and North Bank, which is closest to the stadium.

Eugene doesn’t seem like it would be your typical football-crazy town with its hippie roots, but boy is it. The passion Duck fans have for their football team is legendary. Grab your green and yellow gear, and get to Oregon. Because in Eugene, you’ll have a duckin’ good time.

Yo-Yo-Yo! Find Out When I’m Going with Oh