Friday afternoon I arrived at Bush Airport with just enough time to get through security and board my plane for LaGuardia. My eventual destination was Boston. I was flying on a reward ticket, and it was cheaper to connect through New York. This was great in theory, but then I realized I had to leave my terminal, get on a bus, and go back through security in order to catch my US Airways connection into Boston. Hmmmm….that seemed like a lot to do in my 41 minute layover. What a headache. I certainly was not a happy traveler.

After some choice words, I took my exit row aisle seat. People continued to file onto the plane, and I realized it was going to be close to a full flight. Despite the passengers piling in, I was stretched out and comfortable. Would I be lucky enough to have the middle seat open? It certainly was looking like that would be the case.

Just before the door shut, a group of six women were huffing and puffing their way onto the plane. The group filed past me, and I breathed a sigh of relief. To say these women were oversized would’ve been an understatement. Just as I claimed the middle armrest, I felt a tap on my shoulder from behind. So much for the prized middle open seat. 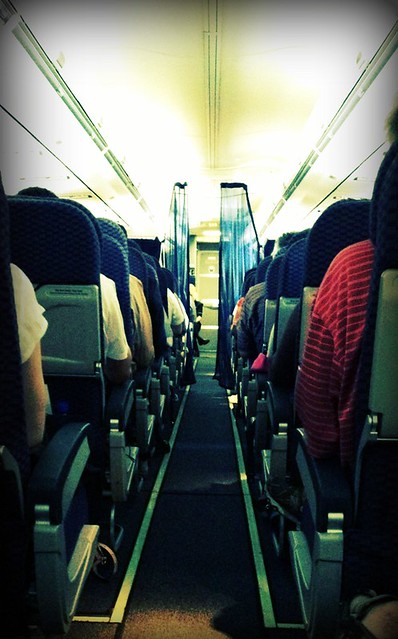 She was dressed in black jeans with a bit of stretch to them.  The chartreuse cotton shirt she wore was pressed just so. She wore wedges, red lipstick, and her short, black hair was fresh from the beauty shop. She was ready to hit the big city, but I could tell she wasn’t a New Yorker. I watched as she tried to figure out the seatbelt and DirectTV. As she wrung her hands and fiddled her feet, she closed her eyes and moved her lips as if she was praying.

I’m normally not one to chat with my neighbor, but something about this woman made me want to speak to her. I explained the TV and how to swipe her credit card. As we taxied along the busy Friday runway, her eyes became saucer-like. I asked her name and where she was going.

Sharice was headed to New York City for the first time with her sisters for a girls’ weekend. It was also Sharice’s first time to fly…54-years old and never been on a plane. I’m not sure what shocked me more, the fact that she’d never flown or that she was 54. 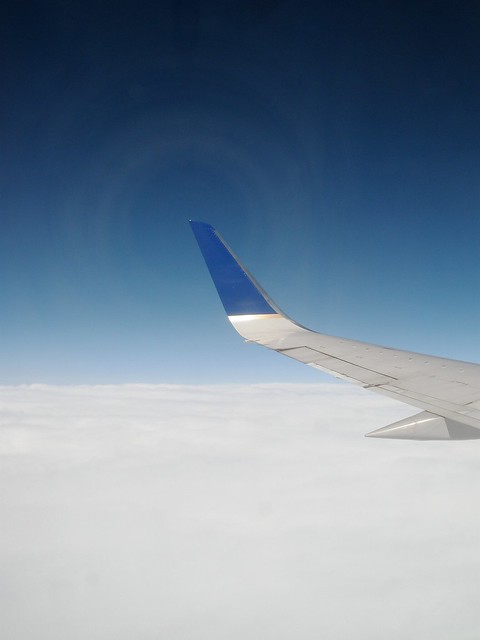 She was distraught, and I knew she needed help getting through the flight. I couldn’t imagine why her family would let her sit alone. I told her exactly what was going to happen, and I talked to her about altitude and how her ears may pop. She certainly didn’t know what to think about that. I walked her though the take-off process, but I’m not sure how much Sharice even heard. She was very concerned that the flight attendants weren’t buckled up yet.

I noticed a bead of sweat running down the side of her face, and I changed the subject from flying to her hometown. I found out that we were both from tiny places, so we talked about grocery shopping at the Piggly Wiggly, having no movie theater, and the best things to eat at a Dairy Queen. Basically, I wanted to keep her mind off the fact that she was about to be hovering above the earth in a metal tube.

I offered to buy her a drink, but Sharice told me that she didn’t cuss, drink, or smoke. She went on about how in her house everyone must abide by her rules, and before we knew it, the green trees blurred past and we were rising into the clouds. Looking out the window, I pointed out Houston’s landmarks. I could see the tension and stress escaping from her body. No longer did she fiddle her feet or wring her hands. A deep breath was released, and Sharice settled in for the four-hour flight.

We chatted a little more, and Sharice told me that the furthest from Houston she’d been was Florida. It took her a day and a half bus ride to get there. I was curious, but she wanted to know about all the countries I’d been to and what they were like. Amazed that I traveled so often by myself, she asked questions that I hadn’t given much thought to anymore. Travel is now inherent. 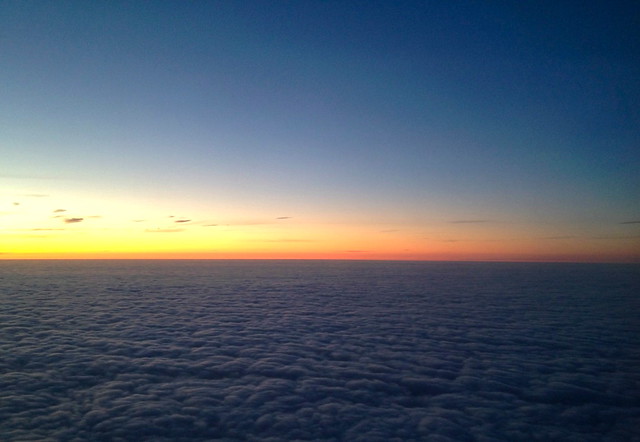 I put on my headphones, but kept an eye on her. I watched Sharice as she observed everything that was happening. She was taking it all in; she didn’t want to miss a thing. This was something she’d waited 54 years for, and she was obviously in sensory overload. The wonder in Sharice’s eyes was that of a child. I thought back to the first time I flew; I was four. I’d been flying for 34 years, and I’d certainly seen places that she’d only heard about. This fact bewildered me.

As we began our descent, I put up my headphones. I’d gotten her through the takeoff, but I knew the landing could be just a scary. I asked Sharice about her plans in New York. Lots of sightseeing and shopping were on the agenda as was a trip to the Apollo Theater. I talked to her about the CityPASS and the hop on-hop off busses. I’m not sure she was really paying attention. We had a tiny bit of turbulence, but I’m sure to her it felt like we were going to fall out of the sky. I explained about turbulence and how the plane is designed to withstand it. The death grip on the armrest ceased.

Sharice wanted to know about the New York subways. Someone told her to buy gloves, wear closed-toed shoes, and bring a newspaper to sit on. I threw my head back in laughter; I simply couldn’t help myself. I explained that most alarming thing about the subway was the smell of urine and maybe a few rat sightings. Since I was right about the takeoff not being frightening, Sharice took my word on the subway, too.

I loved listening to her talk about the New York trip. It was something truly special to her, and with each comment, I watched her brown eyes dance. This was the trip of her lifetime. I decided that we all deserve to have at least one trip of a lifetime, and I’ve been fortunate to have many. 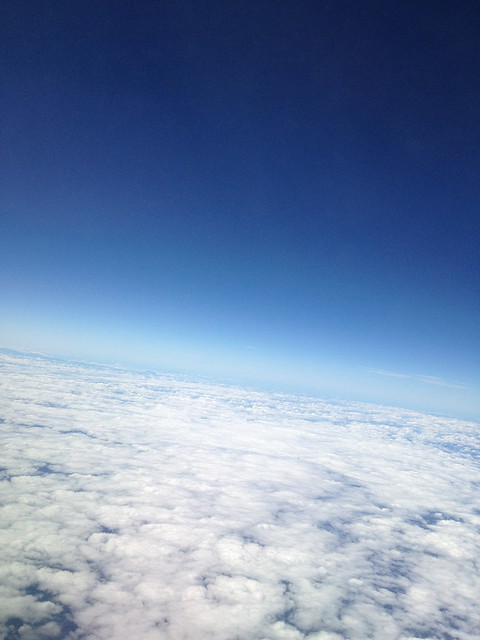 As the New York skyline came into sight, I pointed out famous landmarks just as I had in Houston. I built up the city, and told her that it is everything and more than she could imagine. I could see excitement building in her eyes; the fright had been bullied out. The captain announced that we were arriving 20 minutes late, and I made a flippant remark about missing my connection to Boston. This concerned Sharice much more than me. This wasn’t my first rodeo; I knew I’d get the next hour’s flight.

The wheels extended and she flinched, but quickly was back at ease when we hit the runway. We were safe and sound, but instead of jubilation or relief, Sharice looked disappointed, like a kid whose quarter had run out on a ride.

It took 54 years for Sharice to set foot on a plane, and she lamented that fact as we taxied to the gate. A whole new world of possibilities opened to her in four short hours. She talked about all the places she’d wanted to go, but didn’t because it would take too long by bus.

She had an epiphany, and I was happy for her. I wondered if she’d actually follow through on her words and embrace this new sense of freedom. Sharice even talked about wanting to get a job as a flight attendant. I chuckled to myself and was proud at the same time. 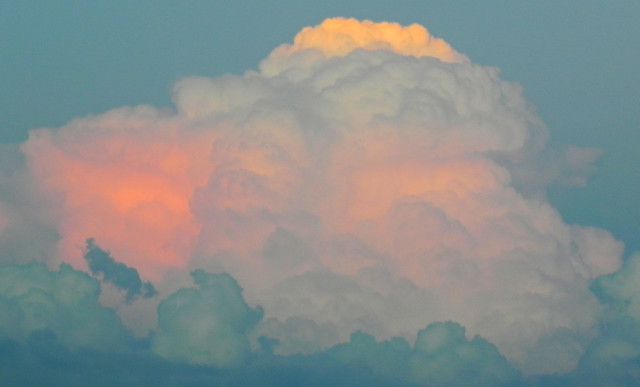 I gathered my stuff and stood in the aisle ready to sprint to my gate. I knew I wouldn’t make it. I’d just have to figure things out once I deplaned. Sharice stood up and gave me a big ol’ bear hug. She squeezed me tightly and thanked me profusely. I’d gotten her though the flight, something that she was obviously dreading, but it was me that should have been thanking Sharice.

I’d been reminded how glorious and exciting it is to get on a plane bound for unknown places. Flying isn’t just a means to an end. It’s an adventure within itself. I’d forgotten the joy of airports, planes, and even security, but seeing it through Sharice’s virgin eyes renewed my love for the process of traveling, even the frustrating parts. 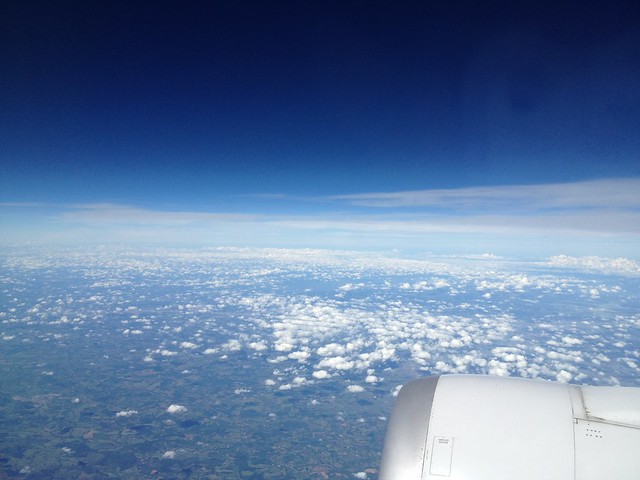 I didn’t make my connection, but I did get the next hour’s flight into Boston. Things didn’t run smoothly on the way back to Houston either. My US Airways flight to LaGuardia sat on the runway for two hours before being sent back to the gate and ultimately canceled. I’d been up since 4:00 am. I was tired and hungry, but I wasn’t put out in the least. Thanks to Sharice, I’d been reminded that every part of travel is an adventure.

I was able to rebook a direct flight to Houston for no additional miles or money. Sometimes it’s about being open and staying positive. While others on my same flight were griping about missing this or that, I took it in stride. Besides, what could I do besides roll with the punches?

I wish I’d see Sharice again. I’d give her a big ol’ bear hug. I’d tell her that I was proud of her bravery and admired her newly-developed sense of adventure. Then I’d ask her what she thought about the New York City subways and if she plans on pursuing that career as a flight attendant.

I’d let Sharice know that I made it to Boston. I’d tell her about Beacon Hill, the Old State House, and Fenway Park. I’d go on about the lobster rolls, raw oysters, and cocktails I’d devoured. Then I’d assure her that travel opens our lives up to a world of possibilities, and that it’s never too late to get started. I’d tell her of the love I’ve found and the life-long friends I’ve made as a result of my travels. 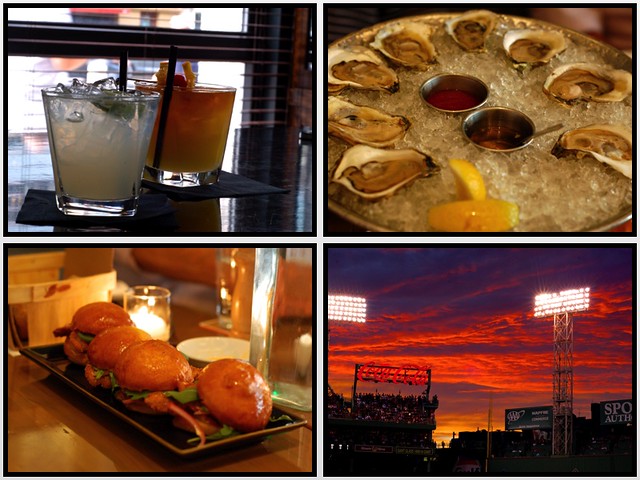 Sharice took the opportunity to express her gratitude, and I’m saddened that I didn’t do the same. Unfortunately, she’ll never know exactly what she did for me. A person who’s barely been out of Texas taught this seasoned traveler to open her eyes and take in every single aspect of travel. I wish I could thank Sharice in person for breathing fresh life into my travel spirit. She reminded me that it’s not just about the destination. The journey is pretty damn entertaining, too. I’ve just got to be open to experiencing it.

How I Roll: The ABCs of Travel

Jump or Get off the Ledge aka I Quit my Job

Packing Non-Negotiables: Stuff I Gotta Have

Why I Travel: A Dedication