I was 31, newly married, and planning on moving to Southern California. My husband and I were visiting Naples, Florida looking into an investment property. Yes, we were moving to LA from Texas and going to own a home in Florida. Yeah, it doesn’t make any better sense now either.

I was enjoying a beautiful, warm Sunday in Florida when my mom called. 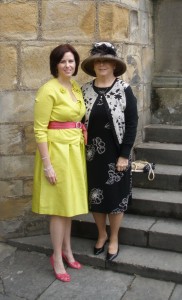 I was surprised, but not really. I knew this day would come. So did she. This call has been made too many times in our family. Five years earlier, my cousin made the call. It was breast cancer, and she wanted my mother and me to come to Duke Hospital in Durham, North Carolina to meet with her geneticist. All it would take was a blood sample, and we would know our risk for breast and ovarian cancer.

She refused. She didn’t want to live with that knowledge. She just assumed that she would have cancer like her two sisters gone before her. There was nothing she would do differently, regular doctor visits and all that.

No blood test for her.

Twenty-five is certainly a young age to think of one’s mortality. Yet there I was in that situation. If I were tested and positive for the BRCA gene, my mom would know that she, too, was positive. She didn’t want to know, and in all honesty, I’m not sure I wanted to know either.

No blood test for me.

This is one moment I wished life had a rewind button. We reached the proverbial fork in the road, and unfortunately chose the wrong path. What if? I ask that to myself all the time. What if I had encouraged her to take the test? What if I had just done it myself?

Eight hours on the operating table and we learned that the ovarian cancer had obliterated her abdominal cavity. A year and a half was the average lifespan for stage three. I was enveloped with sadness and fear. This was too much. After a complete breakdown in the hospital parking lot, I dried my tears, said a prayer, and made a decision. My mom had taken care of me for 31 years, and now it was my turn to return the favor. I marched myself into her room, and told my dad that I was going to use all of my accrued days from work to be with Mom.

I was never so sure of anything in my life. I left Austin for Houston the next morning. I needed to pack. I needed to find someone to cover my classes. I had 25 days and was going to use them all. Someone else could teach Shakespeare.

I took her to one of many chemo treatments. Little did I know, but her doctor had plans for me. I was cornered and practically hog-tied to the chair. This was it; I was having the test if I wanted to or not.

My thoughts swirled like a West Texas tornado. The doctor told me, just as the Duke geneticist had several years earlier, that I had an 85% chance of being diagnosed with breast cancer and a 25% being diagnosed with ovarian cancer. Compared with the average woman’s chances, this was close to a sure thing. I would welcome those odds in Vegas.

Nothing happened overnight, but changes were made. We canceled the house contract, threw out plans for California, and I taught just one more year. It was a step in the right direction. For three years after quitting teaching, I was willingly unemployed. I traveled with my husband as he worked, but I was lost. I was allowing life happen to me. There was some serious self-examination that needed to occur, and probably some professional help wouldn’t have hurt either.

I stayed with my mom often.

Her health was up and down like a ship sailing around the Cape of Good Hope. She navigated her way through surgeries, radiation, and chemo. She laughed in the face of the eighteen month average life span. In fact, it was around eighteen months that we went to Scotland and England, her first trip to Europe. The travel bug bit her. She and my dad took cruises; physically she could handle those. It’s not that she didn’t always love to travel; she just was too busy being a parent and teacher. What she wanted took a backseat to everyone else. Besides, she thought, there would be plenty of time to do all the things she wanted during retirement.

We made plans to visit New York City. It didn’t happen. A lot of things she planned didn’t happen either. After four years, the chemo wasn’t working anymore.

My mom died at age 64 on February 9, 2010. A month later, we saw the sun set atop the Empire State Building and the Manhattan lights from the Brooklyn Bridge. We took a train to New England where she’ll forever see the spring blossoms in the Old North Church garden. In April of 2011 we climbed the Great Wall and took a luge to the bottom. And then in December we listened to the Pope and walked the streets of Ancient Rome.

“Get busy living, or get busy dying.”

Andy Dufresne said it best in The Shawshank Redemption. His words are the best way for me to convey my reason for traveling. I want to see things that I can’t imagine. I want to do things that scare me. I want to go places that I’ve only read about. I want to meet people that are nothing like me.

I don’t know what my fate may be, but for as long as I live, I want to be an active participant in my life. I can’t control what genes I was born with, but I can control what I do every second, every minute, and every hour of every day that I do have. Tomorrow is not promised. That’s just one of the many things my mom taught me, and for that, I am forever grateful. This site is dedicated to my mom, who thought I was the greatest writer in the world {except when I used curse words}.

Life is too short to live with a someday mentality.

The Dreaded Long Layover: 5 Ways to Pass Time at the Airport