One of the many fabulous things about Paris is its central location, multiple airports, excellent connections, and exceptional train system. Compared to the USA, it’s relatively easy to hop a train or plane and be in a completely different culture and country. Another thing I love about France is its diversity. Within a couple of hours, you can be skiing the Alps or on basking in the French Riviera sun. It’s still France, but feels a million miles away from the cobblestone streets of Paris.

Recently, my American cousin asked for suggestions for getaways within three hours from Paris. He had no preference for transportation—plane, train, or car was fine, as long as the travel time was around three hours. With seemingly endless options, I offered up a few suggestions.

The gateway to possibly my favorite region in France is the lovely town of Aix-en-Provence. You ask any Parisian about Aix and they’ll sing its praises. That’s saying something, because Parisians rarely gush about anything. Home of Paul Cézanne and a favorite of great authors such as Émile Zola and Ernest Hemingway, Aix-en-Provence is perfect to visit any time of the year, even when the fierce Mistral winds are blowing.

Founded by the Romans, the city of about 150,000 has no shortage of historical sites. See the Cathedral of the Holy Savior, which was built on the ruins of a Roman forum. Visit place de l’Hôtel de Ville and its 17th century centerpiece building or wander Quartier Mazarin for its notable hôtels particuliers. After, head to the wide street of Cours Mirabeau, with its rows of trees, surrounded by divine homes and fountains. In fact, Aix-en-Provence is known as the ‘City of a Thousand Fountains.’ It’s a must to spend a few hours relaxing in the thermal springs, which gave Aix-en-Provence its name {Aquae Sextiae}. From 24, 48, or 72 hours, check out the City Pass available at the tourism office for more inspiration.

Get There: Take the TGV from Gare de Lyon.

Thanks to its legendary wines, Bordeaux is known far and wide. However, there’s more to this area in southwest France than the Merlot grapes it grows. The fifth-largest city in France, Bordeaux is chic and quaint, if that’s possible. Thanks to the large university it has a great youthful energy, which blends nicely with the sophisticated wine families and river cruise tourists.

The best way to experience Bordeaux is on foot, exploring the ancient alleyways and historical buildings. Cultural offerings abound, with an incredible opera house and numerous museums. The latest addition to Bordeaux is Cité du Vin. This ultra-modern museum on the bank of the Garonne River is an exploration into the world’s wine growing history. High-tech, informative, and entertaining, Cité du Vin deserves an entire day to visit. Finish with a glass of wine on the panoramic top floor. Choose from a rotating selection of ten wines from around the world. A glass is included with the price of admission.

Get There: Take the TGV from Montparnasse.

Travel Time: Quickest train is 3:16, but will be just over two hours with the new TGV train

Strasbourg is a crazy French/German hybrid of a city. Located on the two country’s borders, Strasbourg has changed hands several times over the centuries, hence the unique identity. One look at the menus and you’ll understand: Choucroute garnie is a mix of salted meats and sausages, potatoes, and sauerkraut; flammekueche is a cross between a quiche Lorraine and pizza; and baeckeoffe is a meat, onion, and potato casserole, which means “baker’s oven” in the Alsatian dialect. It’s certainly not what comes to mind when thinking about French food.

Visit the famous Notre Dame Cathedral and walk through the alluring Petite France historical neighborhood. It’s France, so make sure and sit on a terrace and enjoy plenty of the delicious wine from Alsace. And if you’re lucky enough to visit during the Christmas season, take time to wander through the famous Christmas markets for food, music, handicrafts, and an overall festive atmosphere.

Get There: Take the TGV from Gare de Est.

Perhaps you think I’ve gone mad, but reserve judgment for a moment. A non-stop flight from Paris to Reykjavik is 3 hours and 20 minutes. Trade in strolls on the Seine for a Golden Circle tour and the City of Light for the Northern Lights. Exchange the beautiful buildings for gorgeous glaciers. Rather than sitting on terraces, relax in the Blue Lagoon. I can’t imagine a bigger change of pace so close to Paris.

The really cool thing is that Iceland Air and WOW both offer stopover programs. What that means is that between Europe from North America, you can have up to seven nights {on Iceland Air} in Iceland. Imagine a holiday in Paris, then exploring the natural wonders of Iceland at no additional cost. Plus, you’ve knocked a little over three hours off of your trans-Atlantic flight back to North America. That sounds pretty great to me.

Get There: Fly from Paris to Reykjavik on Iceland Air or WOW.

Enchanting, Bruges is possibly one of Belgium’s most popular tourist towns. It’s easy to see why with its medieval architecture and fairy tale-like atmosphere. Bruges is known as the ‘Venice of the north’ with its multiple canals running through the city. In Flanders, Bruges is located in Belgium’s Flemish-speaking region, as opposed to the French-speaking area of Brussels.

Only a couple of hours from Paris, Bruges feels a world away. The language changes, as does the food. Forget the wine. This is beer country, and Belgium has thousands in which to choose. Stroll through Markt Square; visit the 14th-century Stadhuis in Burg Square; and get engrossed in the marvelous art collection at Groeningemuseum. A couple of nights exploring Bruges is definitely worthwhile, and traveling around Belgium by train makes for a memorable holiday.

Get There: Take Thalys from Gare de Nord. Change trains in Brussels.

With three hours of travel time from Paris, the possibilities are only limited by your budget and desires. There are countless options, and this list only scratches the surface. Italy, Switzerland, Germany, Austria, Greece, the UK, and so many other places in France could have easily been included. What do you think? Where would your great getaways within three hours of Paris be? 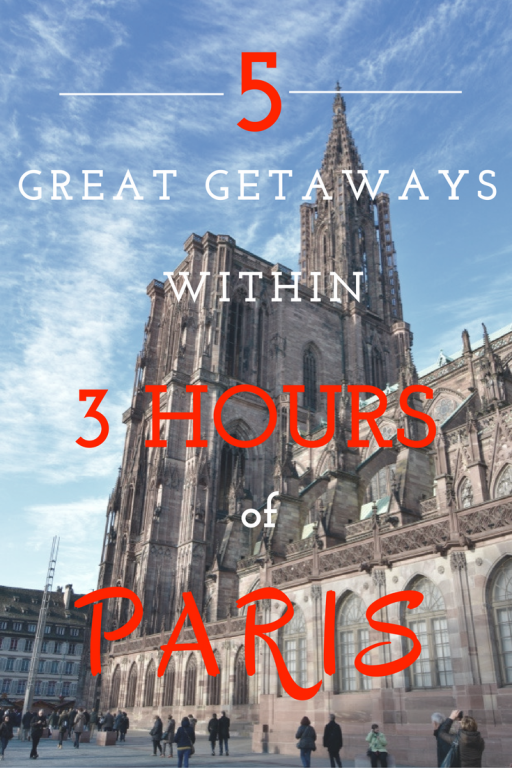