“I’m a producer at BBC World Service radio, based in London (though we broadcast across the globe, including on several hundred NPR stations in the US). I’m hoping to track you down asap, because we’re lining up a discussion on our show tomorrow morning about cruises. In short, P&O (one of the world’s oldest cruise liner companies) is turning 175 tomorrow, and we’re keen to look at the very points you made in your recent blog posting. People either love or hate the idea of cruises…” 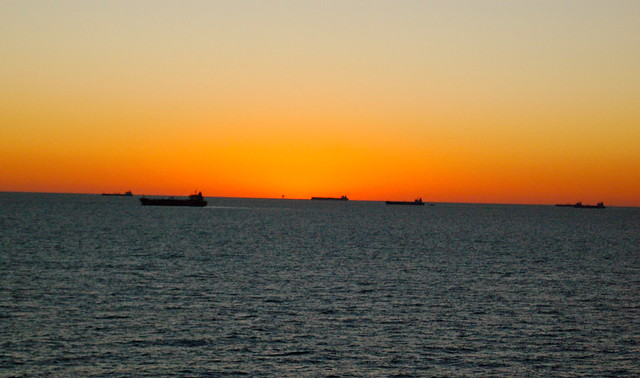 Ocean sunsets are the best part of cruising for me.

And so my Monday morning began. I hadn’t even finished my coffee or properly woken up before this email from BBC producer, Paul, flashed across my iPhone screen. My first instinct was to laugh. He wanted to interview me about my hatred of cruises? I’d written that in mid-April, and although it’s not my most viewed post, it is the one with the most comments. With 120 comments (some of which are mine), “I Hate Cruises” brought out people that echoed my disdain and others that sang the virtues of cruising. I even got my first troll. 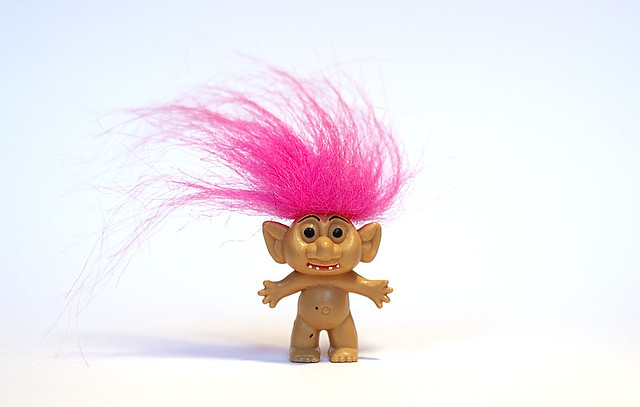 Josh and his friends (Credit)

“Your writing is very generic. You use every over-used phrase known in the U.S. and for someone who praises autheticity (sic), you cleary (sic) don’t have a genuine opinion. You are just writing because you think its (sic) cool and maybe someone will give you attention. Just limit yourself to taking pictures and giving them titles, and leave the ‘real’ writing to actual people who have talent.”

Initially this threw me for a loop. Had he told me I was unattractive or a bitch (he later told me I needed to “get laid”), I might have given it a second thought. But to attack my writing skills? I took it that Josh wasn’t a regular reader. He obviously hadn’t heard that I’d won an international writing competition just six weeks prior or that my give-a-damn is broken.

Since I knew I was dealing with crazy, I responded in a calm, diplomatic way:

“Thanks for stopping by, Josh. While I appreciate your comment, I’m not sure what it has to do with cruising. And please don’t take offense when I say that I don’t put much stock in the opinion of someone who misspells two words and misuses another when criticizing my writing.” 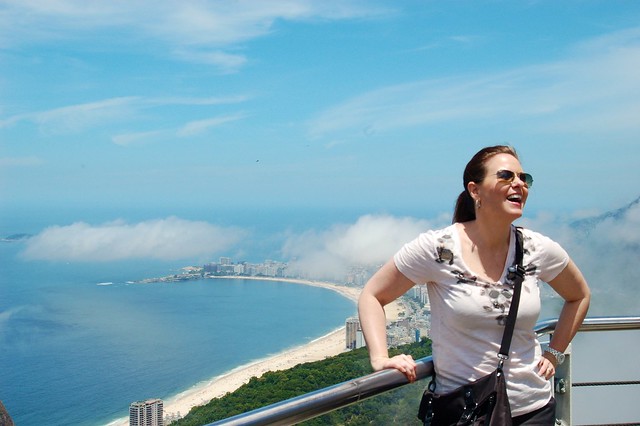 I laugh in the faces of the Joshes of the world.

Josh didn’t realize what he was getting himself into. He didn’t know that I’d dealt with smart-ass teenaged boys as a high school English teacher for a decade, and a supposed 29-year old pediatric nurse didn’t stand a chance with me. Madness and mayhem ensued. Josh continued to attack and I egged it on by approving his comments, posting it on Facebook, and responding. Readers came to my defense and BAM! My first and only troll disappeared into the night. As fun as that was, I never would have imagined my little post would have landed me on international radio. 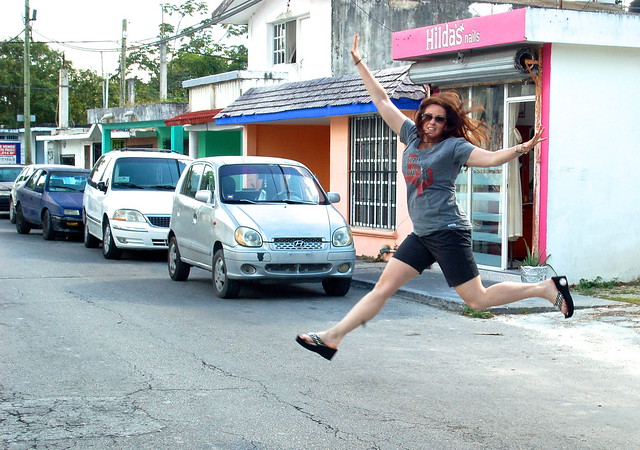 Jumping for joy for my BBC opportunity

I sent Paul my cell phone number and he immediately called. In a very alluring Australian accent, Paul explained that the interview was for a morning show called “World Update” and that Dan Damon, the presenter, would be asking me about my hatred of cruises. Cruise lover and author of books about cruising, Brian Smith, would also be on air with me. I could imagine that I was being led like a lamb to slaughter, but Paul assured me that it was going to be a light-hearted piece. 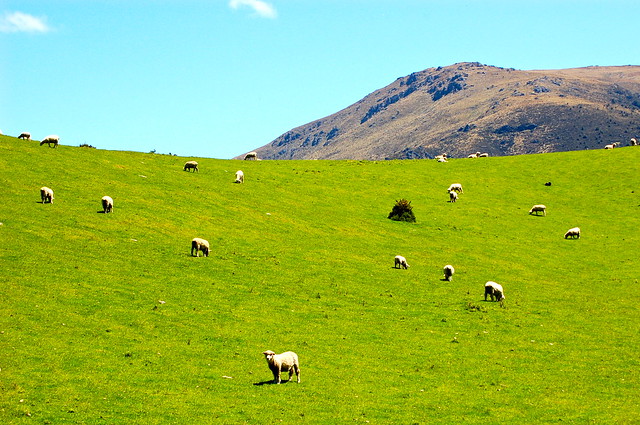 Was I like these New Zealand lambs waiting for slaughter?

I agreed to go live on air at approximately 4:45 am Texas time. Paul proclaimed that my “blood’s worth bottling for getting up this early.” I’m not sure what that means, but I’m guessing it’s a compliment. After we said our goodbyes (and he invited me to BBC for a tour when I’m in London in December!), the magnitude of what I was about to do hit me like a lead pipe to the back. Seriously! I threw my arms in the air to stretch and my neck and back let me know who was boss. I immediately grabbed my neck and cried out in pain. Had the stress of being a big-time radio personality already taken its toll?

I set my alarm for 4:15 am, which isn’t much earlier than I usually get up, and a restless night ensued. I tossed and turned trying to find a comfortable sleeping position; my neck ached despite my lunch massage. Somehow I managed to turn my brain off. After all, this wasn’t TV. It’s radio. I’d be in my pajamas talking on Skype from my comfy bed. What did I have to be nervous about? I was being asked about my opinion. And although one’s opinion can be ill-informed, it can’t be wrong. I would be fine. 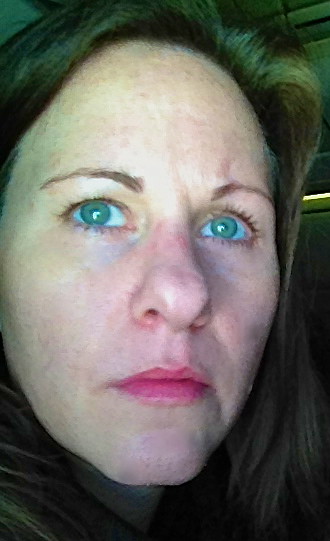 Me in the morning…not pretty, my friends.

My iPhone alarm rattled me out of bed with the chiming of a bell tower. Although my morning breath wouldn’t be detected, I brushed and gargled with mouthwash just the same. My computer and notes were ready to go, and I sent an email to Paul letting him know I was available. The blue “S” popped up on my computer screen, and I answered. On the other end I could hear the radio program in the background and a producer with an English accent wish me good morning. It was almost go time and the butterflies swirled in my stomach. We would be on in approximately five minutes. Scenarios flashed through my mind as I sat up a little straighter in bed. I’m not sure why, but it couldn’t hurt. If I still had sleep in my eyes, it was instantly shaken out when I heard,

Ugandan King Rwoth Philip Olarker Rauni III had just been interviewed and now it was my turn. Are you kidding me? Yes, this was really happening. Take a listen to this slice of radio gold. (I’m on at 12:48)

Here are my take-a-ways from my brief brush with fame on BBC “World Update”:

I’ve got some work to do if I’m going to be a big-time radio star with the likes of Paul Havrey, but it’s a challenge I welcome. Overall, I don’t feel too badly about my performance, but I know there is room for improvement. Will BBC or the like ever contact me again? I sure hope so. I promise I won’t suck my teeth and I’ll TRY not to say “uhh” more than three times. 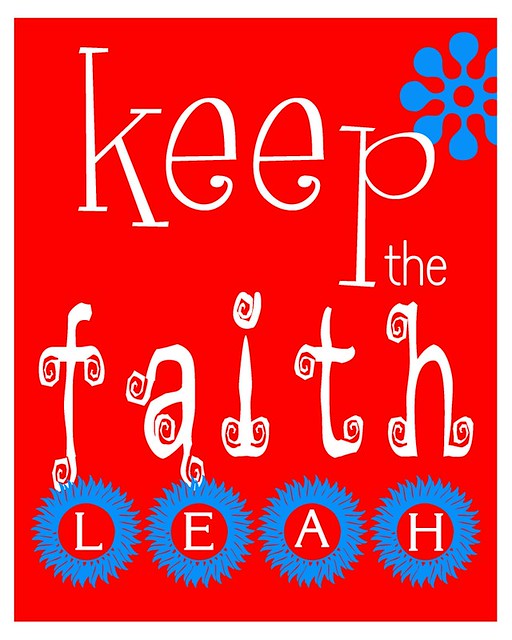 Thanks, Subway-Sign.com for the advice!

And Josh, if you’re reading this, I’d like offer my heartiest thank you for being the judgmental, self-important ass that you are. I have no doubt that the extra attention that my post received moved “I Hate Cruises” up in the Google ranks, which is how the BBC producer found me.